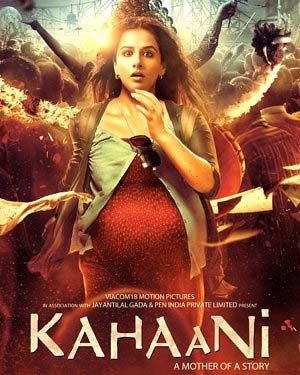 Actress Vidya Balan's "Kahaani" has set a new record by attracting crowds in its fourth week and director Sujoy Ghosh thanks everyone for appreciating this dark thriller about a woman's hunt for her missing husband.

The film has reportedly reached the Rs.50 crore-mark since its release March 9.

Made at a small budget of Rs.8 crore, the film's collections show that it's a bumper hit of the first quarter of the year. Despite no skin show and no glamour, the film has rocked the box office.

"Thank you again for loving 'Kahaani' as we enter 4th week. Thanx for your blessings and for everything good you wished for our film. We are in your debt," tweeted Ghosh.

Actress Shilpa Shetty is enjoying every phase of being pregnant and loves being pampered by all.

The actress, who married London-based Raj Kundra in 2009, announced her pregnancy on Twitter in December 2011, calling it the "most beautiful phase" of her life.

"Thank you all so much for all the love and good wishes. Gods grace, all going very well. The best part of pregnancy is that everyone is so nice to u! So much love and pampering all around. Bad part everyone feeds u so much," tweeted the actress who is expecting her first baby in May.

Arjun married former Miss India and supermodel Mehr Jesia in 1998 and they have two daughters, Mahikaa and Myra.

The actor will be seen in Bhandarkar's upcoming film "Heroine" opposite Kareena Kapoor. The film is expected to come out in September this year.

Neil Bhatt talks about prepping up for Ghum Hai Kisikey ...
-4 seconds ago

Pooja Bhatt: "Alcohol was my drug of choice", Opens Up about ...
16 minutes ago

Taapsee Pannu: Will ‘break all ties’ with Anurag Kashyap if ...
58 minutes ago