For almost a decade now, television has been dominated by soap queen Ekta Kapoor. But the downfall of two of her most popular shows, Kahaani and Kyunki marks the end of the K-factor for Ekta. 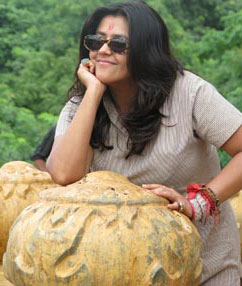 Featured Video
If sources are to be believed, the latest buzz in the industry is that Ekta will no longer make shows with titles starting with the trademark 'K'. "This is true. Ekta has decided to drop the K from all the titles of her upcoming shows", informs our source from the production house.

Ekta has even gone to the extent of renaming her upcoming project on Star Plus. The show that was earlier called Kaisi Ye Mohobbat Hai now has two new names in the pipeline, Mainu Ishq Da Lagiya Rog or Tujh Sang Preet Lagayi Sajana.

Her new show on NDTV Imagine which was earlier titled 'Kabhie Kabhie Isse Junoon Kehte Hai' might also not see the traditional 'K'. "The title of the show has not been decided yet", adds our source.

Ekta Kapoor sure believes in keeping up with changing trends. Now we will just have to wait and see what the Czarina's new lucky alphabet will be.

14 years ago Its nice to see her dropped K thing. It seem a bit annoying to see all shows begin with k titles.

14 years ago lol.. am glad.. i was kinda getting bored with d silly [K] thing

+ 2
14 years ago ugh finally. I have been waiting for a change for quite a while.

+ 2
14 years ago So finally we may see sum new , imaginative titles...not the usual soppy ones

14 years ago if i m not mistaking, Karan has changed his K factor also....he made the movie first time w/o K factor and his movie's name is Dostana.... So Ekta is following Karan Joher....interesting... well kesi ye mohabbat hai was nice title...it's so similar to kesa ye pyar hai and I love that serial... I really miss KYPH...Ekta should make seals's like KYPH

+ 2
14 years ago wooooooooooooow! looks like ekta is hitting back to reality!