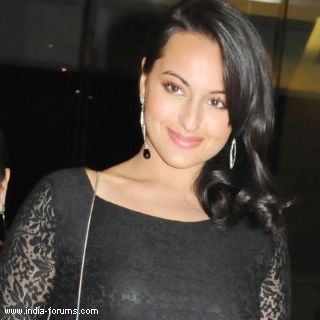 and will continue her tryst with traditional outfits in her upcoming films as well, says she is not comfortable wearing a bikini on screen.

"It's a complete no-no to bikini because I am not that kind of a person. I have been bought up in a certain way. I have certain restrictions that I follow and I don't see any reason to change it because if the audience has accepted me fully clothed, then why would I resort to itIJ" said Sonakshi.

"I am a normal Indian girl who wears jeans and T shirts normally. Born and brought up in Mumbai, so I am used to wearing clothes like that," Sonakshi added.

In recent times, actresses like Kareena Kapoor and Bipasha Basu donned a bikini for the big screen, while Deepika Padukone has flaunted her fit figure in the two-piece swimwear in "Cocktail".

Sonakshi is also a tad apprehensive about doing an out and out bold film ala Vidya Balan, who stepped out of her comfort zone for a film like "The Dirty Picture".

"It was a great film and Vidya's performance was fantastic. I respect her so much as an actress after that film, but it takes guts to do something like that. I don't think I will be able to pull it off with the restrictions that I have," she said.

Currently, Sonakshi is gearing up for the release of her second film "Rowdy Rathore", directed by Prabhu Deva. It also features Akshay Kumar.