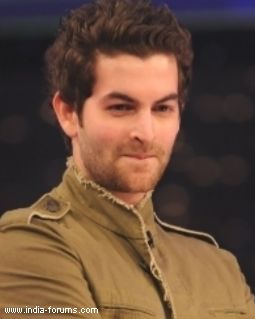 Actor Neil Nitin Mukesh is contemplating getting his ears pierced.

One would wonder why the actor wants to get the piercing, but he explained: 'For films, I have to wear earrings at times.'

Neil will soon be seen in Abbas-Mustan's multi-starrer 'Players', the official Hindi remake of Hollywood film 'The Italian Job'. The film will release Jan 6.

Hrithik Roshan has wished his good friend, actor-director Farhan Akhtar all the best for his upcoming film 'Don 2: The King Is Back', which is releasing Friday.

'Don 2: The King Is Back' features Shah Rukh Khan, Priyanka Chopra, Lara Dutta and Boman Irani in key roles. Farhan, who is city hopping with the team for promotions, thanked Hrithik for his kind words.

'Thanks Hrithik. You're support since the DCH ('Dil Chahta Hai') days has given wind to what could have become a flagging sail. Mucho respeto amigo,' tweeted Farhan.

Imran wants to party with friends in Las Vegas

Bollywood actor Imran Khan, who shot in Las Vegas with Kareena Kapoor for 'Ek Main Aur Ekk Tu', wants to go back to the city to chill out with his friends.

'I am coaxing all my friends to take off for a week and head to Las Vegas. I really had a blast shooting 'Ek Main Aur Ekk Tu' with Kareena and Shakun (Batra) in Las Vegas. We were shooting around this time last year and the place had a fantastic feel and vibe to it,' said Imran in a press statement.

The actors shot in Las Vegas for the romantic comedy for 30 days, says a source. And since Imran likes to explore the city he is shooting in, he started visiting places beyond the regular tourist hangout joints.

After the shoot, he even stayed back for a week to enjoy the city as a tourist.