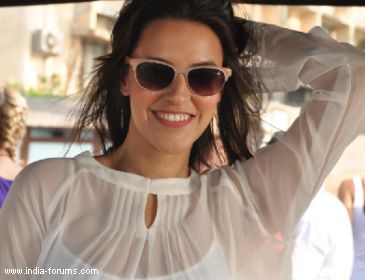 Actress Neha Dhupia says she is very choosy, whether it is about picking a dress or signing a new film.

"I am a very choosy kind of a person. Be it food, clothes, movies or work, I take my time and then decide upon what I need to do," Neha told IANS.

The actress, who was in the capital for a Mother's Day event with mom in tow, says her mother is her biggest critic. But she doesn't consult her before taking up any film role.

"I discuss work with mom, but never take her advice before taking up a role because she does not know anything. But she understands that I am picky about things and that reflects in my work also."

"At times, we have different opinions on certain matters where I don't want to listen to her. But I try to at least listen to her point of view because she is my biggest critic," she said.

Neha, whose father is from the army, plans to take a time off from work and spend Mother's Day Sunday with her mom.

"I am here (in Delhi) to spend the weekend with her. We are planning to go shopping, watch movies and gossip together," she said.

The 31-year-old actress was last seen in "Dear Friend Hitler" and "Pappu Can't Dance Sala". In 2012, she will be seen in Kabeer Kaushik's "Maximum" and in late Shamin Desai's "Rush", opposite Emraan Hashmi.