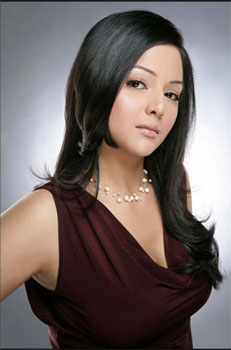 An actor having a makeover after coming back from a break makes news for a number of reasons. In some cases, the comeback movie is the reason; while in some cases the new look the actor sports makes big news.

In case of Neha Devi Singh (remember the original Bhoomika from Saarthi?), it is definitely the latter. The new look that she is sporting is so different from her earlier one, that there is no way you can ignore it or not talk about it! The Neha we all knew earlier was plump, chubby and had a very cutie-pie charm associated with her. But the look in which she has come back, is diametrically opposite. Neha's new look is going to give sleepless nights to the glamour queens and sex sirens who thought all Neha could do was play bahurani roles!

Neha had quit Saarthi due to stress almost a year and a half back. During the break she had great family holidays in exotic locations around the world. And also she did work hard on her look and figure, so much that she lost 14 kilos to ensure the latest head-turning new look.

Does that mean she is back on the telly tube? Neha is not sure since she is evaluating some offers. The grapevine even has it that she is working on a film's script. Ask this to the pretty actress and all she will say is -- "I cannot disclose anything!"

Whatever it is, here's wishing you all the best for your future ventures Neha!

+ 8
14 years ago Neha is looking great. Waiting to see her back on small screen.

+ 3
14 years ago she look absaloutly gawjus, hope to see her in movies are another drama

14 years ago omg what a transformation! She luks gorgeous!

14 years ago She's looking very pretty and hot....Thanks for the article..

+ 3
14 years ago She z looking so good!Have 2 agree she was cute 4m beginning but after the make over....awesome!

14 years ago She has certainly turned into a new leaf! Neha looks good!