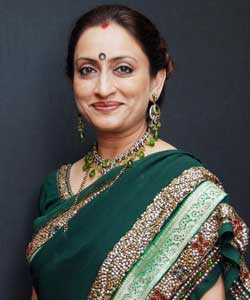 TellyBuzz had earlier reported about Ravi Ojha, the maker of Star Plus' Sasural Genda Phool, bringing up his next on Star Plus. It was also reported that Shaleen Bhanot and Rehan Roy will play the leads on the show.

The show which was earlier titled as Sajda, has now got its final title - Sajda Tere Pyaar Mein and the latest we hear is that Navni Parihar has been roped in to play an important role in the show.

A source says, "Navni Parihar who was last seen in Babul Ka Aangann Chootey Na will make a comeback to television with this show.She will play the mother to Shaleen Bhanot. The actress will be back to television after a hiatus."

We contacted Navni Parihar and she responded saying, "I cannot comment anything right now as nothing has been finalized."

We hear that the production wanted a popular face to play the role of the mother because of which they have finalized Navni.

9 years ago Very happy to know, she is a very good actress! All the best :)

+ 4
9 years ago Thats great news. Just love her. She is really So beautiful:)