View Profile
This is one of those success stories which might be narrated for many times to come. Nasser Khan, a businessman from came to Mumbai with a dream and pursued the dream with immense enthusiasm. The fervour that he showed was so great 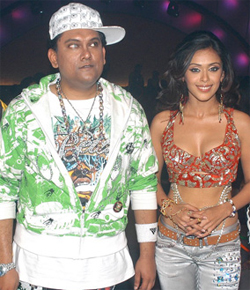 Featured Video
that people around him don't seem to stop being shocked by his antics and dedication.

Nasser Khan, a visually impaired person, is the co-producer and actor in the movie "Shadow - The Dark Side of Truth". The movie is on the floor and news are bursting in like hot flashes about Nasser Khan.

Sources say that recently refused using a stunt-double to do a death-defying scene. The scene was about a car on fire and in it. It entailed him to jump out of the car which would be in mid-air and on fire! Director Rohit Nayyar and action choreographer Baan Rig and Mehmood Akbar Bakshi tried to convince Nasser to use a body double for this scene, but declined to do so.

's belief made Nayyar give in and they did this sequence with a lot of care. During the whole shot the director and the incredible performer interacted with the walkie talkie and this turned out to be a perfect first take! Everyone in the set was stunned and in awe.

has been doing amazing work in this movie. A few days ago while shooting for a song people around swear that every take he gave was perfect on his part. Actress Sonali Kulkarni praises him for his "amazing enthusiasm" and says that he was her "best co-star so far". Undoubtedly his conviction and passion is one of the most inspiring moments of many people's lives. Co-stars Hrishita Bhatt asserts "He has not only inspired me but the whole world will be inspired after the release of this film. The way he works nobody can say that he is blind. He is so efficient that not a single shot has been retaken due to his mistake. A dream person to work with."

Milind Soman too is full adoration for his man with "astounding" qualities.

Seems like a wonderful and interesting and awe-inspiring actor to look forward to.