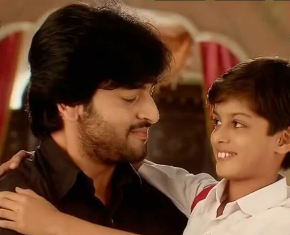 Sphere Origins popular show Balika Vadhu has been showing gripping track as Shiv has been suspended on the false pretext of molestation whereas Jagdish (Shashank Vyas) is seen handling his duties as a MLA.

In the latest episodes we have seen Ganga's (Sargun Mehta) doubt gets even more stronger as she gets to know that the factory which Shyamal Bhai (Akash Khurana) owns supplies harmful drugs. Whereas now the track will take a turn, Nandu who is the younger brother will start misusing the power of Jagdish.

In the upcoming episodes, we will get to see Nandu who is younger brother of Jagdish in Balika Vadhu will take advantage of his elder brother powers and will misuse the same in a negative manner.

According to the sources, "Nandu will bunk his classes in the school and go for playing cricket. He will become very arrogant towards teachers and on punishing him for bunking he answers back rudely and shows off about Jagdish's stature. Being an MLA they keep quiet but after a certain time, this issue reaches to the counselor and he calls Jagdish to the school."

The source further adds, "On the other side Nandu will be harassed from his senior students as they will ask him to arrange question papers for them as his brother is a MLA he can easily get those things done. His seniors will harass him, beat him and teases him so that he can do their work of robbing question papers and arranging them from his brother. After a limit Nandu decides to talk about this with his brother Jagdish."

Now it will be interesting to see what will be Jagdish reaction on knowing his brother's intention. And how will he react on this. What will he do with Nandu and how will he handle his seniors. And will the counselor will forgive Nandu mistake?

NatalyMusketeer 5 years ago Siddharth Shukla, you are just the best of all...