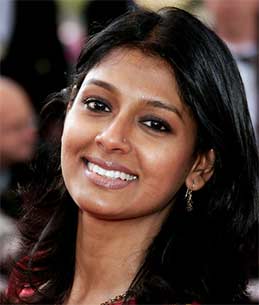 She would be performing the full-on filmy dance for the first time in her career and the director has roped in the formidable choreographer to teach Nandita her dance steps.

Rehearsals are on full-swing for what promises to be the biggest challenge of Nandita's career.

Apparently Saroj Khan, known to reduce the likes of Raveena Tandon to tears with her exacting instructions, is giving Nandita sleepless night over the filmy gyrations.

Speaking shyly of her first steps at Bollywood dancing, Nandita exclaims: "Can you believe it, in all these years I've never danced on-screen, probably because I've been seen in a particular image both off and on-screen. But hey, I also enjoy dancing! And I'll prove it."

Known to be a hard task-master, Saroj Khan is spending considerable time coaching Nandita on the "latka-jhatka".

Apparently the actress is not too comfortable with some of the gyrations, but she is getting there.