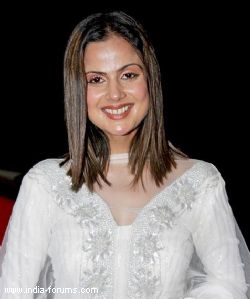 Nandini Singh who got into the spotlight in television with shows like Kesar and Kkavyanjali has recently been in the news as she is one of the approached candidates for the upcoming season of Bigg Boss.

Even though it is still uncertain whether Nandini will book a place in Bigg Boss 5, the actress seems to be keen on making her way into television! She is now all set to be part of an episodic in Sony TV's Adaalat.

Our source states, "Nandini will be seen in the Independence Day Double episode story which will be aired on 13th and 14th of August. The story revolves around a Chief Minister, played by Vikas Anand who gets accused of killing a reporter. Nandini will essay the spokesperson and PRO of the political party. She will be the mastermind behind the activities that happen in the party. Noted actor Nagesh Bhonsle will be the public prosecutor in this case against KD (Ronit Roy)".

When contacted, Nandini confirmed the news and said, "Yes, I will be seen in Adaalat. This is a role that I have not done before. The whole story revolves around me, and that's what I can tell you".

When asked about her probable participation in Bigg Boss she says, "It is true that I have been approached. But there is no confirmation as yet".

Let's hope Nandini makes it big in her second innings on TV..

ashukaushik21 9 years ago this will gonna more intresting a new girl in Adaalat but i love to see Adaalat coz of d suave dotty lawyer KD PATHAK.

9 years ago Back after so long!

Haven't seen her on TV since Kesar.

9 years ago many known actors in adaalat nowadays! good...

9 years ago The whole role revolves around me ...says it all really, its that narcissitic attitude that kept her unemployed for so long

+ 4
9 years ago I love that gal and longing to see her now. After kesar ended. She virtually has become moon of Eid .