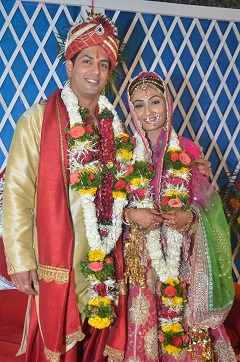 Television's popular and beautiful actress Namrata Thapa who rose to fame after the portrayal of her character in Zee TV's popular show Yahan Main Ghar Ghar Kheli and was last seen in Badalte Rishton Ki Daastan, has now tied the knot with actor Saumik Rao.

The actress tied the knot with him on 14th February of this year with Saumik who was once his co-star in NDTV Imagine's Mahima Shani Dev Ki in which they were playing husband wife. The duo fell in love with each other during the show and now the couple is happily married.

TellyBuzz spoke to the actress to hear more about her wedding from her. She happily told us, "My wedding happened in Mumbai on 14th February this year. My wedding was totally a family affair. I had invited few of my close friends from the industry but they couldn't turn up. It's a love marriage and Saumik was my co-star in Mahima Shani Dev Ki. Later, he left acting and he had to continue with his family business. They own a health club in Ahmedabad. He is currently staying in Ahmedabad and I am in Mumbai. He is so supportive towards me that he told me that I had to leave this field but I want you to continue with it as he knows that acting is my passion."

She further added, "We belong to North side and Saumik is a South Indian so it was little difficult for his family to get convinced for this marriage as our culture is different but they agreed. They are very sweet and nice family. Currently I am in Mumbai and now I will be meeting people to get back to my work."

Well we wish the couple a hearty congratulations and a happy married life ahead!

romancefan 6 years ago Congrats Namrata! Wishing you lots of happiness!

love_karanabha 6 years ago Congrats to namrata and her husband

Ms.S.K. 6 years ago Hope fans can see Samrata on their screens soon. missing them

mytri 6 years ago Congratulations!! Wish you both happy married life

Surbhiholic55 6 years ago Congratulations Namrata :)
May you have a great married like

Dear_Samrata... 6 years ago all the best

however i thing sameer dharmadhikari much perfect pair to her

Samrata-Addictz 6 years ago i dont like the way her marriage full of question mark ,first why its was secret as both family agreed to that marriage

Joshua_TANHA 6 years ago IF cant you find her husbands photo? Him being an actor , you should have had his phot