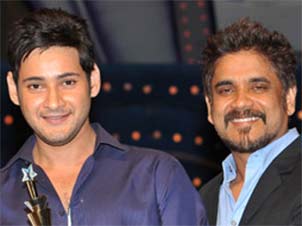 If all goes well, Telugu superstars Akkineni Nagarjuna and Mahesh Babu will team up for a Tamil-Telugu bilingual with ace filmmaker Mani Ratnam, who is currently busy working on the script for the project.

"Mani sir had met Nagarjuna last week, discussed about the film and wanted to know if he was compatible to share screen space with Mahesh. Nagarjuna said he wouldn't mind working with Mahesh if given an opportunity," Nagarjuna's manager told IANS.

"The script is not yet ready. (He) said he will return soon with the complete script of the film," the manager added.

Apparently, Mahesh Babu also gave a green signal to the idea to work with Nagarjuna.

Known for films such as "Roja", "Dil Se" and "Thalapathi", Ratnam's last Tamil directorial "Kadal" turned out to be a disaster at the box office.