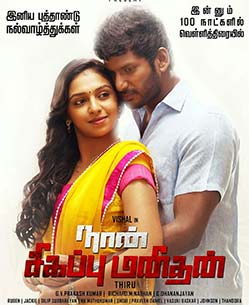 Director Thiru says his film "Naan Sigappu Manithan" talks about narcolepsy, a neurological sleep disorder, and Vishal Krishna had to work very hard to play the guy suffering from the problem because there was no reference point to get the body language right.

"It's a concept that hasn't been used in films so far. Playing a character with such disorder was not easy and Vishal worked extremely hard for it. I feel it's his most challenging role because for Vishal's character we didn't have any reference," Thiru told IANS.

"Since there were no films made on the concept, we only had to rely on documentaries and books for research. The biggest challenge was getting the body language of someone who suffers from the rare disorder to perfection. Vishal and I watched several real videos on YouTube to get it right," he said.

The film's teaser was released Wednesday and the director wants to create a buzz about the disorder through it.

"Through the teaser we didn't want to promote the film, but the concept shown in the film. Not many know about narcolepsy and we wanted to create awareness about it. Therefore, the teaser was about the introduction of this rare disorder", said Thiru

"The teaser was made in such a way that it piques the curiosity of the audience. If you see the teaser, we start by showing the symptoms of the disorder followed by a medical explanation. We also have a scene directing to the Google search page of Narcolepsy.

"We included the Google search page scene to persuade audience to try it too. I'm sure after watching it many would have googled about the disorder and that by itself is an achievement for us," he added.

Thiru, who worked with Vishal in "Theeratha Vilayattu Pillai" and "Samar", says he didn't write "Naan Sigappu Manithan" for the actor.

"I didn't write the film for Vishal. When I came across the disorder, I was intrigued to include it in a script. When I shared the idea with Vishal, he couldn't believe that such a disorder exists. He googled about it and eventually agreed to do it," he said.

Besides research, Thiru also consulted doctors to know more about the disorder.

"What fascinated me was that there are levels associated with narcolepsy. A person suffering from the disorder will fall asleep at the snap of a finger while experiencing extreme emotions. It could be happiness, fear and so on. We needed an expert to help us understand all this," he said.

"Not only did we consult neurosurgeons, but we also had a few on sets while shooting. I think it was a great learning process for me," Thiru added.

It’s been real emotions and natural tears for Vishal Karwal!

Gulki Joshi: Playing Ambika In Purush Has Been My Most Challenging ...

"We’ve all Seen Our Worst as Humanity this Year": Ali Fazal
7 minutes ago