Eesha Koppikhar has lashed out at her manager for misleading her and blames him for having signed up for an insignificant role in '36 China Town' and B-grade films like 'Haseena'.

'I trust people very easily and I trusted my manager, Babubhai Thiba, too, but he misled me on several occasions,' Eesha, who was seen in recently released family drama 'Ek Vivaah... Aisa Bhi', told IANS. 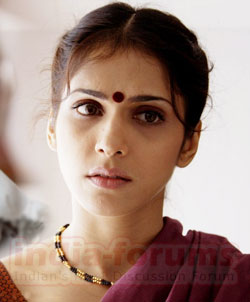 ' 'Haseena' is a B Grade film, which I learnt only after signing it. Babubhai misled me by not letting me know about the actual status of the film.'

'Haseena', which also starred Raj Babbar, Preeti Jhangiani, Tara Sharma and Kiran Janjani, was released in February 2007 and was a box-office dud.

Eesha was also not happy with her small role in Abbas Mustan's '36 China Town'. 'It was again Babubhai who made me sign this film in an insignificant role,' she said.

When contacted, Babubhai refused to comment on her allegations.

Eesha came into limelight with the item number 'Khallas' in Ram Gopal Varma's 'Company'. Later she went on to act in Varma's 'Darna Mana Hai' and 'Darling' but doesn't consider him as her mentor.

'He did not give me anything more than I deserved. 'Khallas' was a hit, but he did not launch me in a film,' said Eesha, who is also doing Varma's 'Shabri'.

In 'Shabri', she plays the lead role of a slum girl who later turns into a gangster.

'For 'Shabri', it was not Varma who trusted me, but the director Lalit Marathe - he showed confidence in me. Varma had his reservations on casting me for a slum girl's role. Varma confessed to me that he thought I was too glamorous for the role,' the actress said.

Eesha thinks it is Sooraj Barjatya who took a bold step by casting her in 'Ek Vivaah... Aisa Bhi'. In the film, she plays a simple middle-class girl, much in contrast to her glamorous image.

'I'm really thankful to Sooraj-ji for trusting me for his film. He went against the norm by giving me the role. Whatever I will do now, I will credit Sooraj-ji for that,' she said.

As far as 'Ek Vivaah...' not doing well at the box office, Eesha said: 'I don't know about the figures, but I would like to say I'm very proud of whatever I have done in the film.'