New Delhi, March 24 (IANS) TV and film actor Bobby Darling - whose original name is Pankaj Sharma and who likes to be referred to as she rather than he - has made homosexuality almost acceptable to her fans. And now she wants to play a prostitute.

'I loved Shabana Azmi's role in 'Mandi' and consider such roles challenging. I want to play a prostitute,' said Bobby, who was in the capital for the launch of a new album, 'Hey Chhorie', in which she features with Survi Chatterjee.

'I would also love to portray a negative character in movies. I love taking risks, it helps you grow,' Bobby told IANS. 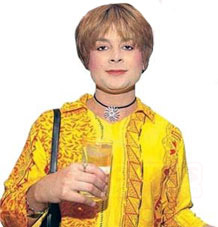 'When people call me by my original name I feel good, but now sometimes I wonder, is that me they are calling?'

Bobby shifted to Mumbai from Delhi eight years ago to make a name for herself in the film industry.

'I went to Mumbai to do parallel cinema with Gulzar, Shyam Benegal, but was never taken seriously. I then realised that I had to work hard to make a name for myself in the industry.'

'I never wanted to be part of the crowd.'

Bobby admits that living without any support in Mumbai was not easy.

'I just had Rs.10,000 in my pocket when I landed in Mumbai. I worked as a bar dancer for nearly two years to earn my livelihood. I used to struggle during the daytime, and dance in the clubs at night.'

Talking about future projects, she said: 'I have five movies in the pipeline along with an international film.

'I even have a kissing scene with a Pakistani actor in one of my movies and I felt nice doing the scene.'

Bobby will be starring in 'Money Hai Toh Honey Hai' along with Govinda and Manoj Bajpai, in 'Horn Ok Please' with Nana Patekar, Rimi Sen and Muzammil Ibrahim and in an international movie titled 'Club 007' where she plays the role of a transsexual pole dancer.

'I was born against nature. If nature has made me this way, it is not my fault. I can't do anything about it,' she said. 'My soul is that of a woman.

'Though I am fighting my own battle, I am giving direction to many.'

Bobby, who is saving money to undergo a sex change surgery but is not sure about the move, has thought about a new name too.

She replied: 'I might rename myself Chicklet and introduce myself saying, 'Hi, I am a chick, my name is Chicklet. Would you like to chew me?'

After the surgery, Bobby plans to get married and settle abroad. 'I do not want to struggle all over again as then people will stop taking me seriously.'

With her name featuring in the Limca Book Of Records for being the openly gay actor with the maximum number of films and TV serial appearances as a gay and a cross dresser, Bobby is now looking forward to making it to the Guinness Book.

Ask her about her dream man, and she rattles off names like young Indian MP Rahul Gandhi and Bilawal Bhutto, the son of late Pakistani leader Benazir Bhutto.