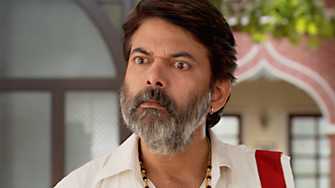 While Sunil Singh is known for his tough image on screen, his character in Balika Vadhu is no different.

In this candid chat with TellyBuzz, Sunil speaks about Balika Vadhu and a lot more.

Viewers have witnessed a lot of characters coming in and moving out of the show. Each of these characters having their own peculiar quality. When asked about his character, Sunil answers, "Akhirej Singh is totally a different character. He has lived a life according to the norms and values that he has come across in his journey. He is a very dominating and an uneducated and all the things that he has seen, he follows them. This character cannot be compared to that of Basan Singh (Satyajit Sharma).

Change is not easy for the audience to accept. With this major change of introduction of an entire new family, he says, "Change is important. Sometimes, change is for the good, sometimes it is for the bad. According to me, this new chapter that has begun is for the good. Everyone has worked hard to connect with the audience well. We are trying to give our level best with the faith that viewers will like it and appreciate our work. But for sure, audience will not anytime soon will the audience will see Akhirej Singh changing himself or his attitude. What happens in future is something that is in the hands of the writers and viewers to watch."

TellyBuzz wishes Sunil Kumar Singh all the luck for the new venture!

6 years ago When playing negative character one has to convince himself/herself that it is negative but that doesn't make the character positive.Wonder how long they will stay.I am sure what ever it may be they will be dispatched just like the Shekhars have been dispatched.

+ 2
6 years ago Why they themselves compare with other characters from the BV1.0 and say don't compare. I wonder who compared Akhiraj SIngh to Basant!!!! .

Looks like new family is here to stay longer.

+ 4
9 years ago I am sick of Big B's news. As much as I respect for him for his talent, he seems like a cocky little... and its annoyinng to see you guys find some stupid news about him every single second.