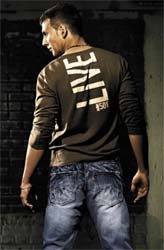 'Though the company has used various words to describe its new product, what I can say is that my butt looks good in the jeans,' Akshay said at the launch of the Levis 501 brand here Tuesday.

Akshay, 40, who is riding high on the success of his recent release 'Singh Is Kinng', will be seen in a series of ad campaigns for the brand. The first television commercial will go on air Wednesday.

'I have maintained myself well and I can carry any product that targets youth. I endorse products which I believe in,' said Akshay.

'I strongly believe that Levis is a good brand and I have been associated with it since my childhood. The first jeans that my father bought for me was a pair of Levis,' said Akshay who is the first Indian celebrity to have been incorporated by the company for endorsement.