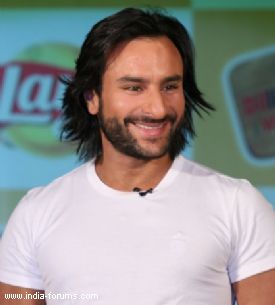 In over two decades of association with Hindi films - as an actor, and now as a producer - Saif Ali Khan says his best investment ever has been to join the $2 million Indian movie industry, where the business is now almost "doubling".

"My best investment is to join Bollywood. It's such a good investment. The business is doubling. When we started, things were not the same. It's a great time now for the filmmakers and actors," Saif, who made his acting debut with 1992 film "Parampara", said in an interaction.

He was seen in a different avatar in "Dil Chahta Hai", and then went on to star in key roles in movies like "Kal Ho Naa Ho", "Ek Hasina Thi", "Hum Tum", "Parineeta" and "Salaam Namaste".

"Omkara" came as an image-breaker for Saif, and he was noticed in films like "Race", "Tashan", "Love Aaj Kal", "Kurbaan" and "Aarakshan".

Now awaiting the release of rustic actioner "Bullett Raja", the National Award-winning actor is glad to be a part of the present "exciting phase" in Indian cinema, where "experimentation" seems to be the key.

"I don't think I could have done such a role (role in 'Bullett Raja') two or five years back," said the 43-year-old, who plays a gangster in the Tigmanshu Dhulia-directed film, which releases Friday.

"Now I think I am ready for these kinds of roles. Now I feel I have understood my work, and different kinds of films are being made. So, it's an exciting phase," he added.

In fact, now Saif is convinced that an actor should do films other than the commercial ones.

Citing the example of his mother, veteran actress Sharmila Tagore, Saif said: "If you look at my mother, she was a box office star, but she also did a lot of (different) cinema with Gulzar saab. It adds dimension to you (an actor)."

The gist, as he sees it, is that "you should be a successful actor", and since "the industry is growing, one should not limit oneself against doing different kinds of films".

Even as he is busy producing Hindi films under his banner Illuminati Films, Saif is not a Bollywood buff.

"I don't watch Hindi films! I don't know why," said the actor, who completed his studies in England.

"During my childhood days, I remember watching Doordarshan and Nirupama Roy crying on screen. That time I decided to watch (Hindi) comedy films.

"Then I saw my mother's film...even she was crying, and I didn't want to see her crying, so I stopped watching it. When I started working in films, after shooting in them, I wanted to see something different. So I don't watch Hindi films.

"I respect cinema but I don't watch Hindi films because I want to escape from my work after I finish working."