The last weekend of 2007 presented us with a very enjoyable variety of music and melody. The shows were full of fun and frolic with a usual dose of emotion, social messages and some brilliant performances especially from the L’il Ustaads. Having said that, there was one thing that was very conspicuous in all the four shows - there were contradictions galore in most of the shows. 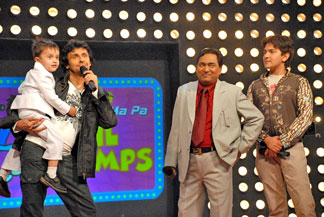 Featured Video
In SRGMP-L’il Champs, performance wise the L’il Champs outperformed one another. The tribute paid to Sonu Nigam was also one of the highlights of the week which left not just Sonu, but even his fans quite overwhelmed. The shocker of the week was to find Amir, one of the most talented participants in bottom 3! Smita Nandi’s reasoning to cover up her “good, but not so outstanding” performance by blaming her tonsils was a rather lame excuse and was rightly chastised by Sonu. But Sonu contradicted the very reasons he gave Smita about gaining public sympathy! His emotional support of Amir Hafeez, on Friday and Saturday inadvertently made Sonu attract public attention for reasons that are totally unrelated to music! On Friday, he brought to public attention Amir’s family background and on Saturday, he highlighted Amir’s illiteracy – two irrelevant points. If that is not publicizing private life and trying to gain public sympathy, then what else is?? 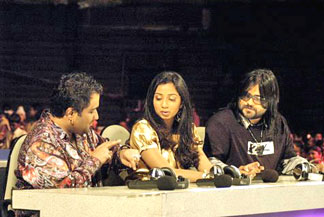 In SVOI Chhote Ustaad, all the performances were outstanding. However, the comments made by the judges made least sense. These judges often say that there are a few errors which they would overlook and more often than not, end up giving the highest grade too! Now, if there are errors, how can they be overlooked or more importantly, how is it that the same participant can get the highest grade? Aren’t they contradicting themselves? As a judge, it is their duty to pinpoint the mistakes so that the participants know exactly where they went wrong and correct themselves. Abhaas as host at times looks quite lost and it’s high time he cuts down on expressionlessly shouting a few standard lines. 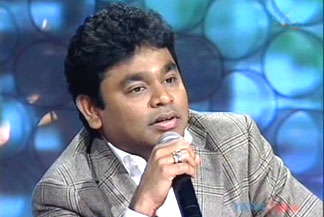 This week Mission Ustaad spread the message for "Upliftment of Women". All the four Jodi's gave brilliant performances with inspiring messages and incidents from their personal life to the world. Though the message was inspiring, their songs were not. It has been pointed out by the judges many times that the songs chosen must fit the subject. But seems the Jodi's are lacking the knowledge of songs available in our music industry, or is it that they are choosing songs that are popular so they can attract the audience for votes? It is now high time A.R. Rahman gives out his views on the songs performed. If only one judge speaks out and the others do not express their views, then how can the audience give the correct results?

K for Kishore is turning a disappointment for the viewers. The performances were really mediocre again this week. Even the amateur L’il Ustaads of Zee and VOI sing more in sur than what was showcased by these seasoned singers!! The only show stealer has been the not known anecdotes shared by Amit Kumar on Kishore Kumar.

The shows will have to rise above mediocrity or cheap publicity stunts. Each of them comes with a mission. To gain public sympathy or to raise the TRP’s the shows should not dilute the objectivities of their individual shows by contradicting the very objective.

+ 3
14 years ago man, I really wish they wouldn't drag AR Rahman into reality shows :( he's not the judgy kind.

14 years ago thnx a lot di! as always u r bang on with ur comments!
am still waiting for the judges on chote ustaad to give critical comments that will clearly point out their mistakes to the participants.
they are, no doubt, excellent but need to be told their mistakes too!

+ 3
14 years ago thnx alot barnali di...
even i felt tht wen javed akhtar n lara dutta speak abt a particular song...ar rahman doesnt hav alot to say and is merely speakin..all he says is i'll wait till the others perform...wat?!?!?

14 years ago Thanks for the analysis...

I think Anwesha was a revelation in Chhote Ustaads this week... Her rendition of Maiyya Maiyya was so classy and showed her terrific maturity as a singer.... Hats off to Jayant as well for presenting the ghazal with such a finnesse... It was shocking to see Anwesha at the scaryland, but thanks to the format of the show.. I am sure that even if she lands up there more (for lack of votes) again, the judges are going to take care of it... The judges have so far been bang on with the eliminations.. always eliminating the weakest singer amongst the 4 in scaryland... I am also looking fwd to more meatier comments from them while grading...

The talent of these chhote ustaads is indeed of the highest level and I look fwd to more of such musical weeks in the days to come :)

+ 3
14 years ago Thanks so much Barnalidi for the analysis, I agree, every single person got straight A's with exception of Smita's B+ and Tanmay's A+'s... both were such good episodes, but the Bottom 3 portion was just so so sad, would have never expected those three to be there :( All the best to Sahil!

hopefully we'll have a great wk this time too... thanks for the article!