Slated to be one of the most anticipated movies of September, Khoobsurat(2014) is all set to hook the audience in an endearing journey of modern day romance and comedy set against a traditional backdrop. The flick marks the Bollywood debut of Pakistan's versatile actor Fawad Khan alongside the chirpy fashionista Sonam Kapoor. Loosely based on the 1980 film of the same title, Khoobsurat is launched under the Disney's banner and has been directed by Shashanka Ghosh. Producers Anil Kapoor, Rhea Kapoor and Siddharth Roy Kapur also roped in Sneha Khanwalkar, of Gangs of Wasseypur [2012] fame to compose the music.
After a September 1, 2014 release, BollyCurry undertakes the task of giving the album a listen and penned down our thoughts. Read on to see whether the music is as promising as the trailer. 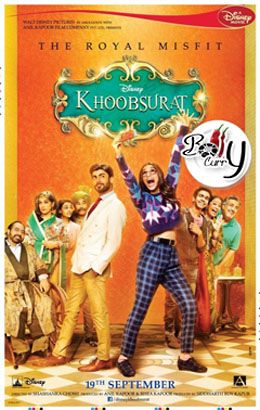 With ample teasers in the trailer itself, "Engine Ki Seeti" opens the album, inevitably. Sunidhi Chauhan and Resmi Sateesh lend their beautiful voices for this fresh and exhilarating track. Nailing the "fun" factor, Khanwalkar did a splendid job with Ikram Rajasthani's quirky lyrics. Using instruments to a great advantage, the song utilizes the sound of a train, making it a catchy number.
Punjabi rapper, Badshah, sings his own composed track, "Abhi Toh Party Shuru Hui Hai" together with Aastha. Also written by Badshah, the song easily became an instant favourite for the playlists with its beguiling lyrics. Incorporating a fair share of instruments and Badshah's immaculate rapping. This track also happens to be the promotional track for the movie, and has already become a huge rage among party-goers.
"Baal Khade" is penned by Sunil Choudhary. Relatively less hyped than the initial two songs, Sunidhi Chauhan did a remarkable job with the vocals. The beats of the drums resonate throughout the song giving it a traditional feel; however, it ceases to gain the desired effect.
Jasleen Kaur Royal sings "Preet" to glory. Soothingly soft and beautiful, this track is one that tugs at the listener's heartstrings. Amitabh Verma penned the amazing lyrics whilst the music makes it a memorable track. Eliminating any messy instrumentals and heavy background score, the song is bound to be a chartbuster.
Priya Panchal and Mauli Dave team up to conclude the album with "Maa Ka Phone". With lyrics by Sneha Khanwalkar and Amitabh Verma, the repeated chorus tends to get out of control a minute into the track. The beats are catchy and head bobbing, but nothing interesting otherwise.
Khoobsurat's album is short indeed however, it is average at best. Nonetheless, this immediately raises the expectation level for the movie itself. Khoobsurat is expected to release in the theatres on the 19th September, 2014 and BollyCurry wishes the entire team success for their venture. Be sure to give the album a listen and tell us your thoughts in the comments section below.
Author: Mohini N.
Editors: Ritchelle C. and Sonia R.
Graphics: Shikha A.
Have a suggestion or comment for BollyCurry? Then drop us a PM at BC_Dropbox today!
23 Likes

"How Lockdown has Encouraged Makers to Utilize Technology in place of ...