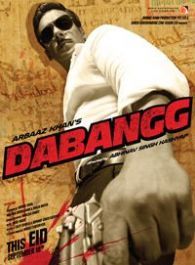 Dabangg promises to be a rather intense movie, revolving around a corrupt police officer, played by Salman Khan, and his family. With Sajid-Wajid at the helm of the music direction - who have previously given us hits like 'Love Me Love Me' from Wanted and 'Happening' from Main aur Mrs. Khanna - the music has high expectations to live up to. Can the songs meet the quality of Sajid-Wajid's previous compositions? Read on to find out!


The album opens with Rahat Fateh Ali Khan crooning to 'Tere Mast Mast Do Nain'. The song is simply lovely with mellow, traditional beats and Rahatji's voice lending a certain soulfulness to the song that no other singer can provide. Jalees Sherwani's lyrics are positively heartfelt and we are certain that this song will be a special favourite with lovers!


This song is followed by 'Munni Badnaam', sung by Mamta Sharma and Aishwarya. The melody is very desi, being more fast-paced than the opening track. Mamta has done a commendable job in bringing a sense of playfulness to the song. Her vocals paired with Aishwarya's makes a rather interesting combination, one that is quite pleasing to the ear. A word of warning for this song, though: the catchy beats will most definitely have you tapping your fingers and toes!


The superhit combination of Sonu Nigam and Shreya Ghoshal takes the next song, 'Chori Kiya Re Jiya'. Most of this duo's previous songs are ballads that have done exceptionally well on the charts and this promises to be the same. The combination of their vocals is a rather safe option though, regardless of how seamlessly they harmonize. The lyrics are once again beautifully penned by Jalees, while the melody is peaceful and soothing. Definitely worth a listen.


Sukhwinder Singh and Wajid lend their vocals to 'Hud Hud Dabangg', which comes in at number 4 Initially, the music leaves one feeling rather apprehensive but it slowly adopts a more tribal beat that reverberates throughout you. The singers' powerful vocals are simply perfect for this track.


The next track is 'Humka Peeni Hai' sung by Wajid, Master Salim and Shabab Sabri. The song retains the desi feel of the album, which hasn't gotten boring yet, considering that both the melodies and the combination of singers change from song to song. Although the singers certainly have impressive vocals, this song itself is rather forgettable.


Following this we are treated to another version of 'Tere Mast Mast Do Nain', this time bringing Rahatji and Shreya together. The song is exactly the same as the opening track except that this time it is not a solo by Rahatji, but a duet with Shreya; who comes in only towards the ending of the song. Her vocals suit the atmosphere of this song perfectly, although it would have been nice to hear more of her, perhaps in harmony with Rahatji's vocals. Again, this song offers nothing more from the original than the addition of Shreya's voice for one verse.


After this song, we have a series of remixes.


First is 'Munni Badnaam',  tuned by DJ Megha, which is definitely comparable to the original. The quickened upbeat lends the song a lot more energy which is most definitely enjoyable. We can see this becoming quite popular on the dance floors!


Then we have the remixed version of 'Tere Mast Mast Do Nain'. Personally, I am apprehensive about ballad remixes. Certainly some of the sweetness of the original melody is lost in the remix, and the feel of the song is different too. Nonetheless, the remix is not too bad.


The last remix is of 'Humka Peeni Hai'. The techno beats are definitely amped up in this song. The playfulness of the song is heightened, but this is not a track I would listen to over and over again.


Closing the album is the 'Dabangg Theme' by Salman Khan. This track is mostly instrumental, with Salman providing some dialogue. The song juxtaposes tribal beats with more modern melodies and has a rather angry feel that is heightened by Salman's dialogues. The melody changes midway to a more upbeat, salsa-style one, which blends with the sounds of violence that are present throughout the entire song. All in all, a rather interesting instrumental.


Overall, the album is fairly appealing, especially if you are one for songs which have traditional, tribal undertones to them.