The upcoming Daawat-e-Ishq, a Yash Raj romantic comedy drama film starring the ever charming Aditya Roy Kapur and the effervescent Parineeti Chopra, directed by Habib Faisal and produced by Aditya Chopra, is set to be released in September 2014. The film is the second collaboration between director and heroine after Ishqzaade, and the first for director and hero. Fan-favourite TV star Karan Wahi will be making his big-screen debut with the film.

But BollyCurry is here to talk about the music, which has just been released. Behind the tunes are Sajid-Wajid with Kausar Munir penning the lyrics. The album has been put together with the grace of one who knows the film intimately, and I think Bollywood enthusiasts will enjoy the fare. 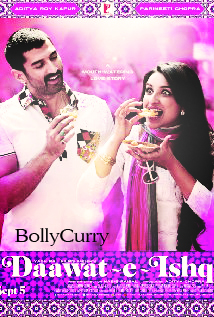 The album opens with a blend of qawali and wedding song flavor. The song, which is incidentally the title track, sung by Javed Ali and Sunidhi Chauhan, has the potential to really grab the audience's attention. It is a well-written composition, and the singers have, as always, done their work justice. This is one that might be hitting the top track charts soon. There's also the instrumental version available.
There are two versions to the next song. Sung by Sonu Niigam, Keerthi Sagathia and Shreya Ghoshal, "Mannat" has its own appeal in each version. The musical arrangement is stunningly done, and we have to give kudos to the composing duo for their composition. The singers have also elevated an already fantastic piece of music with their melodious voices. There is a strong feeling of belonging and an urge to be with their lover present in the music and in the words, stirring the heart as one listens to the song.
"Rangreli" starts with the dhol beat, and then moves on into a brass band beat, and ultimately takes shape into a wedding song type bonanza. Sung by Wajid Ali and Shreya Ghoshal, this is once again a wonderfully written composition, though Wajid does sometimes seem to be a misplaced vocal choice. Still, it is a good song that will have feet tapping.
The next song is "Sharayana", sung by the amazingly talented Shalmali Kholgade. Easy going, catchy and extremely hummable, with a bit of a Western touch, this track is definitely one for the playlists and the club alike.
"Jaadu Tone Waaliyan" is something one would not expect from Sajid-Wajid since it is remotely different from the rest of their usual work. Sung by Shabab Sabri, the song is a little loud with a consistent beat to it that builds up the more you listen. There is a qawali feel to it, mixed with a little bit of rock. It's different, but not bad; definitely something to judge for yourself.
Overall, the album is very promising, and BollyCurry cannot wait to see how the songs fit into the larger picture of the movie. The lyricist has done a pretty decent job, and the compositions are fun and catchy. Nothing particularly outstanding, but I think we will be seeing some of these numbers on the charts soon!
What are your thoughts on the music? Are you looking forward to the movie? Do share in the comments section below. Until then, BollyCurry wishes the entire team success.
Writer: Aradhna K.
Editor(s): Mohini N. and Hershi J.
Graphics: Shikha A.
Have a suggestion or comment for BollyCurry? Then drop us a PM at BC_Dropbox today!