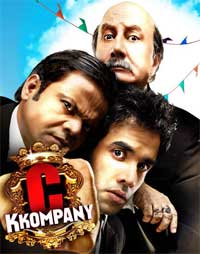 Featured Video
The “C Kkompany’ album brings Bappa Lahiri the son of Bappi Lahiri back in the credits after making a successful debut in album ‘Dus Kahaniyaan’. Anand Raj Anand the experienced one joins him as a second composer and the album turns out to be a trendy one with a blend of comic thrillers and hip-hop music.

The title track ‘C Kkompany’ is an interesting track - one with animated squeaky sounds and has ‘Sanjay Dutt’ behind the mike introducing the three prime characters of the movie. He mellows his gruffy baritones to humorously lively tones. Anand Raj Anand's simple and funny lyrics make the song livelier and perhaps it will be a promising factor in promotional campaign of the movie. The ‘remix’ version of the same song is more rocking and foot-tapping with lively disco beat fillers that will deliver desired thrills on the dance floor.

Bappa Lahiri makes a mark like that of his father in the song ‘Khokha’ with roguish sounding Mika Singh as a lead vocalist and accompanying him is Shabbir Ahmed with his frantic wordings. This song has a fun punch where the importance of money and wealth is emoted. On one side the song is ‘hot n happening’ and on the other it also has all the prime characters splashing out their hilarious personalities. Lahiri has done a good job with perky one liners while Reema Lahiri and Mika add scoop of enthusiasm by their vocals.
The tempo is accelerated in the ‘Club remix’ of the song which is a mix and match of Dj claps and scratches. 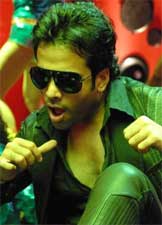 Anand Raj Anand has been a multi-faced talent for the song ‘Speaker Baje’ by being a composer, lyricist, and a vocalist. The song is extraordinary and is one of the finest traditional bhangra pop numbers of recent times spiced with disco bhangra. If promoted well this song can be a hit and to make it peppier it also appears in a ‘Dhol mix’ version.

After heavy dosages of three promotional number comes the original soundtrack in a sober variety of love song ‘Jaane kya’. It is a typical soft love song with sensuous chorals and impressive piano melodies. A promising move from Bappa Lahiri and sharing the floor are delightful singers like KK and Shreya Ghoshal making the song more pleasant and soothing to the ears.

Overall ‘C Kkompany’ is a zestful album with many peppy numbers and a melodious love song, which have a good chance to make its way in top 10. However, being a small budget film with the lack of marketing the music may get lost somewhere in the crowd.