Bachna Ae Haseeno produced by Aditya Chopra has music by the maestros Vishal Dadlani and Shekhar Ravjiani. Already having found itself topping the charts, the music of the film has become a rage with the audiences worldwide! 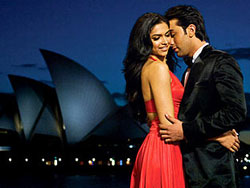 
The first track 'Khuda Jaane' sung by KK and Shilpa Rao, is a lovely, silk-smooth song. Shilpa Rao has gotten her big break while KK brings the song to life. A mesmerizing number, the song is slow, smooth and pleasing to the ear. Shot in romantic and exotic locations like Italy, the song is picturized on the real life couple Ranbir Kapoor and Deepika Padukone an audio and visual treat for the audiences!

The second track 'Lucky Boy' has the voices of Sunidhi Chauhan, Hard Kaur and Raja Hassan is a pub track with funky beats mixed with the tadka of Punjabi folk and Hinglish lyrics. Picturized on Bips, Ranbir and with glimpses of Hard Kaur, this number has gotta be loved by the younger audiences! Sunidhi's voice is superb and one of the USPs of this dance number! 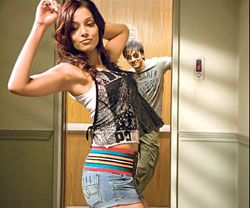 'Aahista Aahista' sung by ace singers Lucky Ali and Shreya Ghoshal is soothing. Lucky Ali's voice is quite refreshing and the mixing of the flamenco style guitar in the song against a slow, soft melody makes the song unique. The overlapping of the voices of the singers takes the song to a different magnitude making it extremely memorable. Shreya Ghoshal like always excels in her singing and Lucky Ali is par excellence!

The next song in the album is 'Jogi Mahi' sung by Sukhwinder Singh, Shekhar and Himani Kapoor. The Punjabi lyrics are meaningful and effective as lyricist Anvita has spun a story in the song. Himani makes a good entry into Bollywood with this number! A fun celebration song, Jogi Mahi will be liked by Punjabi music lovers.

'Small Town Girl' tries very hard to sound like Jhoom Barabar Jhoom. It's a Punjabi-rock song with Shankar Mahadevan giving vocals behind the mike. With not so great music this track describes how a "small town girl" can make men dance on her finger tips. Not the best of the album, this track is somewhat average.

The next song - 'Khuda Jaane Remix' is sung by Abhijeet Nalani taking the track from serene islands to an upmarket discotheque. Bound to be a hit in discoteques, the song's remix will be loved by party lovers on the dance floor. 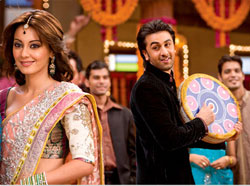 The best is left for the end! The classic title song "Bachna Ae Haseeno" is a hard song to remake especially with musicians like RD Burman and Kishore Kumar behind it. However, having taken this challenge positively this song is definetel the King of the album as it can make anyone tap their feet feeling like a remixed version with voices of Kishore Kumar, Sumit Kumar and Vishal Dadlani together. Vishal's rap gives the song a very crunchy, peppy, refreshing twist. The energy level is quite high and the song feels fresh even after 30 years.

An album offering the right ingredients including variety, beautiful lyrics, music and compositions Bachna Ae Haseeno's music is excellent! With great music, the film is guaranteed to receive a tremendous opening this Independence Day and till then we suggest that you defeintely pick up this album to listen to on your stereos!