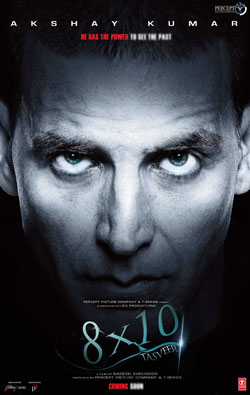 After the success of Fashion and Rab Ne Bana Di Jodi, alot is definitely expected from the musical duo Salim and Sulaiman .

The first song on the list is 'Aaja Mahi' sung by Neeraj Shridhar and Tulsi Kumar. The song starts off with a western flavour and english lyrics. Even though the lyrics dont create much of an impression, the song is pretty melodious. The only drawback is that in some places, Neeraj's voice sounds slightly nazal.
Next up is 'Nazaara Hai' sung by Vishaal Dadlani. The song has a very rock feeling. The strong background music is matched with the powerful is matched woth equally powerful vocals. A song that gets your head banging.

Following it is 'Haafiz Khuda' rendered by Mohit Chauhan and Tulsi Kumar. The song is slow, soulful and melodious. Its definitely got to be a hit with listers. Mohit's voice suits the song very well. The song has too many remixed versions, making one wonder why. Whatever the reason maybe, the original version is still the best.

The song that follows is 'I got the picture' sung by Bohemia, a US based hip hop artist. It is way to similar to 'Chandni Chowk' where the actor sang with this artist. The remixed version sounds very peppy and would probably hit the nightclubs. We do hope that in the next Akshay film, we hear something more original though.

The next song is 'Kuch is Tarah'. The beginning of the song shares similarities with Fashion's 'Kuch Khaas'. The song is sweet and is very sweet. Definitely shows the prowess of Mohit and Tulsi.

The album has many remixes of its song. Seems like a new fashion. The best song would probably be 'Nazaara Hai' with its adrenaline pumping music. Overall, the songs are pretty decent. The album is definitely worth a listen.

BollyCurry Rating:  3.5 out of 5 chillies