Last week on our Music ‘n’ Masti chart many different new types songs made it to our top 10 list. Number 1 position was held by Haule Haule from Rab Ne Bana Di Jodi followed by Desi Girl from Dostana and Guzarish from Ghajini.

Which songs goes up on the chart and which song moves down? Here are Bollywood’s top 10 songs for the week of December 19th! 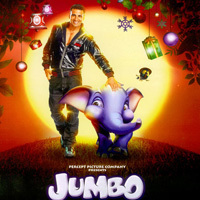 Well, Haule Haule still retains its spot at number one followed by Desi Girl from Dostana and Guzarish from Ghajini. Mar Jawan from Fashion has dropped a couple places while Tere Naina from Chandni Chowk to has climbed up to position number 4 in only a week!

Did you know the animated venture Jumbo is set to be produced in Punjabi?

Did you know that Jumbo’s voice is to be dubbed by the ‘Six Sixes’ fame, Yuvraj Singh?

Did you know Jumbo is all set to release on the same day as Aamir Khan’s Ghajini?

Well that’s all from Music ‘n’ Masti this week! Don’t forget to keep voting for your favourite song!