Q. What is playing in your I-Pod these days?
A. I am listening to classical music these days. And I am also listening to songs from the recently released 'Jab We Met'. 'Surmai Shaam' is my favourite.

Q. What is the music that interests you, and what irritates?
A. I listen to music according to my mood – sometimes classical, sometimes Bollywood. I like any music that soothes my ears. And I get irritated with music whose lyrics are meaningless. These songs should be limited to discos. 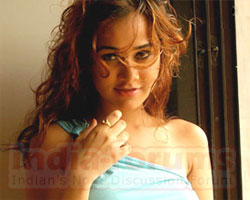 Featured Video
Shanti Om', 'Jab We Met', 'Saawariya', and 'Goal' – which one do you prefer as far as music is concerned?
A. Without a doubt, 'Jab We Met', mostly because the songs are young. Some of the songs reflect our culture, and the best thing is, that the songs are a part of the script.

Q. Your five all-time favourite songs.
A. (Laughs). That is difficult. 'Surmai Aankhiyaan Mein', from 'Sadma'; 'Rote Rote Haasna Sikho', from 'Andha Kanoon'; 'Ek Do Teen', from 'Tezaab'; 'Chalte Chalte', from 'Pakeezah'; and 'Kya Khoob Lagti Ho', from 'Dharmatma'. The last one is a particular favourite – Hemaji looks fabulous in this one.

Q. Name one song that makes you want to dance.
A. Any song from so many Madhuri and Sridevi films. Any song picturised with Helenji is always something one can dance to. One favourite is 'Laila O Laila', from 'Qurbani', which has Zeenat Aman belting out the song.

Q. Do you like the originals as they are, or would you want them remixed?
A. If the remix is done well, then I don't mind the remix, too. However, nothing can take the place of the original. How would there be a remix if there was no original?

Q. Do you think the songs in present movies are better than the songs in older movies?
A. I like both. Both had their time. Some songs sound better than they look. You cannot criticize, because a person, or a team, puts in a lot of effort to create something, and we may or may not like it, but we cannot undermine it. There will always be comparisons between new movies and old movies.