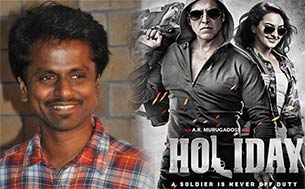 Basking in the success of Akshay Kumar-starrer "Holiday - A Soldier Is Never Off Duty", filmmaker A.R. Murugadoss is back on the sets of his upcoming Tamil directorial "Kaththi". He has started shooting for the film with actor Vijay.

"I'm extremely pleased with the response to 'Holiday...'. I feel like I'm relieved off a responsibility. I'm back on the sets of my Tamil film. We start shooting with Vijay sir today (Monday) and I want to wrap this up without any distraction," Murugadoss told IANS.

"Holiday..." has raked in over Rs.12 crore on its opening day in the country. The film is the official remake of Murugadoss's own Tamil movie "Thuppakki".

With the project, Bollywood actor Neil Nitin Mukesh is making his Tamil film debut in the role of an antagonist alongside Bengali actor Tota Roy Chaudhary, who will be seen in an important role.

"Kaththi" is slated to release around Diwali.