View Profile
Here's some good news for the fans of the Murder franchise! After the unexpectedly high success quotient of 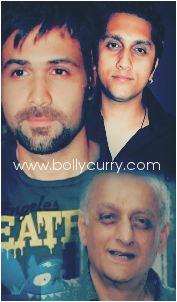 the sequel; director Mohit Suri has been told to halt all other plans until Murder 3 is released.

Considering the current Box Office ratings, Murder 2 is quickly becoming one of the top grossers of 2011 and is currently the biggest hit of Bhatt's production house.

Planning for the script has already begun with Mukesh Bhatt hoping to have it released by summer 2012, whilst the team have pulled together a jubilant party to be held on Friday evening to celebrate the success.

Shagufta Rafique, writer of the previous two Murder flicks has again been roped into pulling together another script as soon as possible. Emraan Hashmi will most likely play the lead whilst his female co-star (unnanounced as of yet) will once more be revamped, as was the case with Mallika Sherawat and Jacqueline Fernandez.

Speaking about the plagiarism issues, Bhatt was heard claiming that he hasn't even heard of the respected Korean film and the similarities, if any, are purely co-incidental.

BollyCurry sits with anticipation over the third Murder movie. Meanwhile, who do you think should play the female lead?