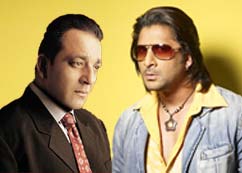 Throughout the Munnabhai series, the audience saw actors Sanjay Dutt and Arshad Warsi as the best of friends on screen. But soon, the duo will be seen crossing swords.

In Indra Kumar's "Dhamaal", Sanjay plays a dashing cop who is after the lives of four lovable and foolish idiots (Arshad, Aashish, Ritesh and Javed) who land themselves in uncanny situations, one after the other.

Arshad says with amusement: "Yes, Munnabhai is out to finish me off in this film! Sanjay plays this very determined cop who wants to make my life hell. Jokes apart, it is a very fun-filled film and the audience will see quite a different chemistry between Sanjay and me in "Dhamaal"."

Whether or not Munnabhai finally manages to catch Circuit is something we would know only when the film releases on September 7.