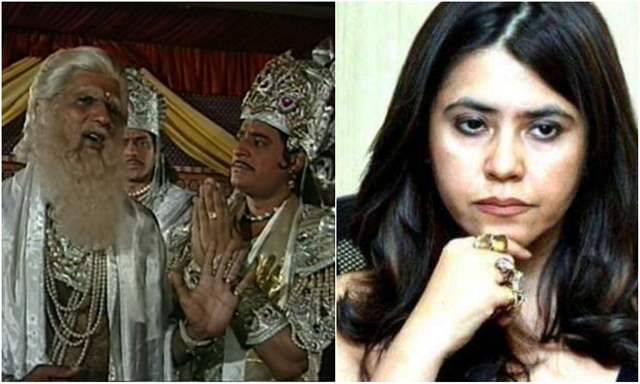 Mahabharat co stars Mukesh Khanna and Gajendra Chauhan have indulged in a war of words, which does not seem to die anytime soon.

In a fresh social media post, Khanna who played Bhishma Pitamah in BR Chopra’s Mahbharat has taken potshots at Gajendra Chauhan who played Yudhishthir. Sharing a picture from the series, Mukesh wrote in Hindi:

(The Dharmraj of Kalyug should be renamed as Adharmraj. The Dharmraj of Dwapar Yug used to speak the truth and support Dharma but today’s Dharmraj says irrational things and uses meaningless phrases to support himself. Mouths filmy dialogues like ‘those who live in glasses house should not attack others’).”

(Ronit Roy had a band on his head in Ekta Kapoor’s Mahabharata and he looked more like Alexander and not like Devvrat that he was playing. He had once said in interview that he did not watch anyone's performance. I was impressed with this statement but, son, read the entire Mahabharata at least. Today, everyone simply delivers dialogues and the actors in new Mahabharata all look like models and are all about six packs. Mahabhrata was turned into Kyuki Saas Bhi Bahu Thi. Therefore, dear Adharmraj! Do not say you were an actor like I was an actor on Mahabharat. You were Gajendra Chauhan and I was Mukesh Khanna).”

It all began after Mukesh Khanna said on Instagram that he refused to go on the The Kapil Sharma Show with the rest of the cast as he found it vulgar.

To this, Gajendra Chauhan had hit back by saying in an interview: “If you see the video, he has himself said that he was not invited and that he would not go on the show even if he was invited. This is like ‘maan na maan main tera mehmaan."

And the rift continues...