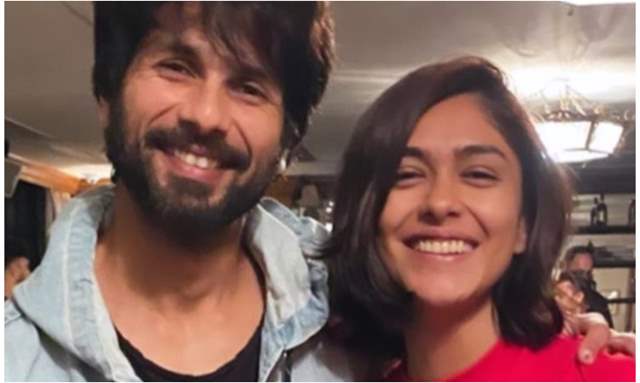 Mrunal Thakur mesmerized the audience with her performance in Super 30. She was seen starring alongside Hrithik Roshan and fans couldn’t stop adoring her.

Now, Mrunal will soon be seen romancing Shahid Kapoor in their upcoming film, ‘Jersey’ and impress her fans with her performance. In a recent media interaction she spilled the beans on working with Shahid and even revealed her favourite film.

A Times of India report quoted her talking about her co-star Shahid Kapoor and said, “when he is on set, he will make sure that he is absolutely into the character because people get distracted.” She explained, between the time the actors are on the set and the director calls action, some tend to lose the character. However Mrunal highlighted, Shahid is always into the character.

The report also mentioned that the 27-year-old actress has been watching Shahid’s films and she has watched all of them. She also revealed her favourite film of Shahid Kapoor which is ‘Haider’ where she claimed she has seen a different shade of Shahid.

Mrunal also added that she watched Shahid’s films not as a performer or audience but with the sole intention to learn. The Super 30 actress also used to bombard him with questions on the set.

The Gowtam Tinnanuri directorial - Jersey is yet another Hindi remake of the hit Telugu film for Shahid after ‘Kabir Singh’. Shahid will be seen playing the role of a cricketer in the movie which also features Pankaj Kapur as his father in the film.

Meanwhile, on the work front, Mrunal has Toofan in her kitty which is helmed by ace filmmaker Rakeysh Omprakash Mehra. The film revolves around the life of a boxer and features Farhan Akhtar in the lead. She will also be seen in the comedy-drama Aankh Micholi.