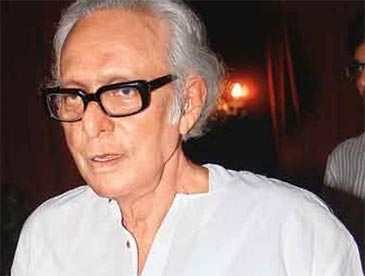 "Ninety years ago there was an accident - my birth, and another accident is waiting to happen - my death and I have the courage to accept it graciously," says avant garde filmmaker Mrinal Sen, who retains a youthful zest for life despite his advanced age.

Participating in an interaction with film celebrities, many of whom worked in his movies at one time or the other, Sen recalled how he overcame fund problems and got acclaim by operating on shoestring budgets.

"Now people are ready to provide me with loans of Rs.5 crore to make one movie, and I tell them I can make five movies in that budget," Sen said during an interaction on his birthday Monday.

For the filmmaker, who turned 90, cinema is a lifestyle.

Having broken barriers with his films, short films, documentaries and books, Sen resolutely echoes British philosopher John Stewart Mill's sentiments, as he reflects on society at present: "collective mediocrity is destroying us. The enemy is within and we must learn to recognize it and fight it."

Sen, who made his first film "Raatbhor" in 1955 and has since traversed over half a century in his celluloid journey, tells his juniors: "Art is inexhaustible and learning is a never ending process. Always revise your own conclusions, always argue with yourself and be courageous to make the movie you want, never fear the outcome."

Be it films like "Baishey Shravana" (1960), which was his first directorial venture to enter a foreign film festival (London Film Festival), "Padatik" (1973), which was shown in the Director's Fortnight at Cannes, or the national award winners like "Ek Din Pratidin" (1979) and "Ek Din Achanak (1989), Sen's movies have all delved deep into sensitive issues like war, political upheavals, family grievances, the Indian middle class etc.

Eevn at this age Sen, believes in being forever youthful and said: "I dislike people touching my feet and request them to address me as Mrinal-da."

The interaction brought up the legendary conversationist in Sen with his matching sense of humour.

"He is equally adept at gossip as well as serious chats with his cast and crew. At times such sessions would continue for hours between shots, so much so that the shooting would get delayed," she said.

Serious cinema might be his forte but this maverick filmmaker is known to play pranks on set.

"On one occasion he had hoarded all the match boxes in his pockets, provided to him by his cast and crew upon his request to light a cigarette," said Sreela.

Mamata Shankar spoke about how Sen established a personal rapport with each of his cast.

Director Gautam Ghosh said Sen always took time out from his busy schedule to read scripts sent to him by upcoming directors, who value his comments.

An admirer referred to the part Sen played in arranging for an unwell fellow director Ritwik Ghatak to be flown from Dhaka to Kolkata by helicopter for treatment.