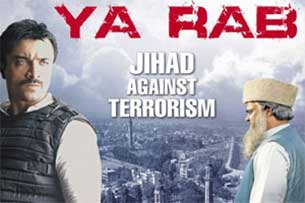 There is something to be said about a film that speaks out loudly against the religion of intolerance and the culture of violence.

And eye for an eye may be fine for an era gone-by. In today's day and age, just chill, and curb the rage.

That's the message this loud and melodramatic film puts across with a deafening gusto and a blinding sincerity.

While the treatment of the theme of anti-terrorism harks back to the Bollywood potboilers of the 1970s, there is clearly an abundance of passionate integrity in the depiction of the Good Religion and Bad Religion. The characters are seen sighing, bellowing, chortling or wailing...depending on what the background music commands them to do.

The storytelling accommodates dozens of characters , good and bad, all screaming for attentions in accessorised conspicuousness. There is something for every taste here, from a cute little boy who knows his holy scriptures in and out, to a speech-impaired teenager who suddenly discovers his tongue and becomes a human bomb in a terror attack staged in shopping mall.

The plot is a playground of heightened passion. Boutique-purchased costumes, beards and caps play pivotal characters along with the melee of actors who crowd the canvas.

Every sequence ends with an italicized exclamation mark. The grammar of storytelling is exceedingly elemental. But the heart is in the right place.

The characters tend to jump out of the screen with their aggressive moral righteousness, or inversely their religious fanaticism. Ajaz Khan, last seen making a nuisance of himself on "Bigg Boss-Saath 7", is fairly restrained in his cop-act.

Somewhere in the first-quarter of the crowded hectic storytelling, the veteran theatre and film actor S.M. Zaheer shows up to deliver an impassioned and effective monologue against the religion of intolerance. Zaheer makes you listen.

The rest of the cast is purely hammy, as per the need of the hour.

Director Hasnain Hyderabadwala works on an ambitious and volatile subject. The intention is certainly noble. But the vision doesn't quite match.

On the sheer strength of its valorous intention of exposing the pitfalls and sham of religious fundamentalism "Ya Rab" deserves to be seen.