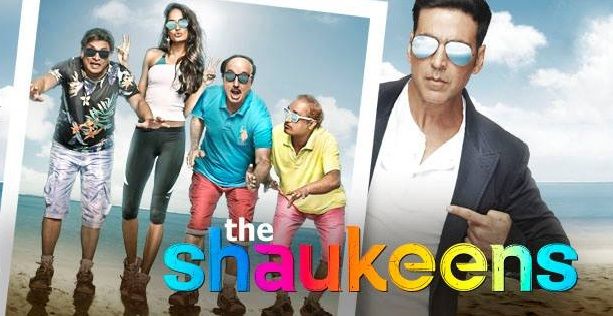 What do you expect from a film where three lecherous old men go to Mauritius just to have some fun? Isn't it disturbing to see old men, almost of the age of your grand parent, checking out every passing girl?

The Shaukeens is a story of three shaukeen men, Laali (Anupam Kher), KD (Anu Kapoor) and Pinky (Piyush Mishra). Laali's wife turns a devotee and abstain herself from all the pleasure of married life, KD is a bachelor  and Pinky's wife passed away when he thought he got time from his work and family to enjoy. They try every possible way to get laid without being labelled as Tharki Bhuddas, but as we know this isn't easy in India. So, the three friends fly to Mauritius and there they meet a heartbroken girl Ahana (Lisa Haydon).

Ahana claims to be the biggest fan of Akshay Kumar, who happens to visit Mauritius at the same time for shooting a film. To impress Ahana and get lucky each friend makes her meet the heartthrob Akshay Kumar and there the story takes a funny turn.

Anu Kapoor, Anupam Kher and Piyush Mishra were completely into their character and looked natural. Lisa's role of today's generation typical youth, for whom world revolves around social networking site and whose happiness depends on how many likes they got on their FB status update, is well played. Akshay Kumar is seen in a very different role, but his performance was as always spectacular.

The film boasts of trendy and peppy numbers. Composed by Honey Singh, Hard Kaur, Vikram Negi and Arko Pravo Mukherjee, all the six songs have already been loved by music lovers.

The film has few funny scenes, specially the inside industry jokes. Otherwise, cannot comment much. You might like the film if you are a fan of Akshay Kumar and want to see a complete new side of him on screen.