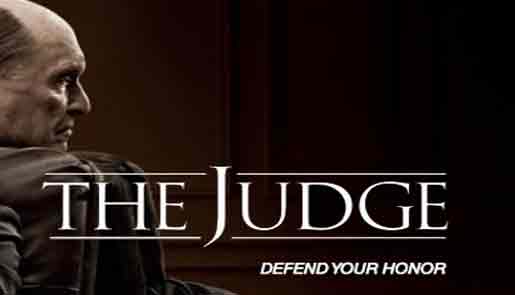 Director David Dobkin's "The Judge" is not just a courtroom drama. The pivot of the story is in fact an estranged father-son saga.

Hank Palmer (Robert Downey Jr), the suave and successful Chicago criminal defence lawyer in the midst of a divorce, has turned his back on Indiana, and on his family, particularly his father Judge Joseph Palmer (Robert Duvall). He is seething with a strong sense of betrayal, although it is revealed subtly. The news of his mother's demise takes him back home after 20 years.

"Nothing changes," Hank mutters to himself as he drives into Indiana after several years.

Metaphorically too, nothing has changed between him and his father who holds him responsible for jeopardising his brother Glen's bright career in baseball. Glen (Vincent D'Onofrio) was grievously injured in a road accident when 17-year-old, Hank was at the wheel.

The undercurrents of tension, the sardonic barbs between the father and son have in no way diminished with the passage of time. The funeral over, Hank is heading back to Chicago.

A hit-and-run accident of a former convict, which lands his father, Judge Palmer in the dock, is the turning point. Even though their relationship is far from perfect, Hank offers to defend him.

The courtroom drama is indeed interesting, but it is the father-son relationship that is even more engaging. The scene with the tornado as the backdrop, where Hank confronts his father, giving vent to his deep-seated animosity for his father, accusing him of "running the house as he runs the courtroom", is gripping. The petulant Duvall is equally a powerhouse of emotions, giving credence to his reasons for being strict with his son.

The film has a mix of the poignant and the powerful with some humour thrown in for good measure, albeit through gibes and sarcasm.

It is a treat to watch Robert Downey Jr. after a long time in a new avatar. He delivers a power-packed performance with a broad spectrum of emotions ranging from the smug lawyer who does not hesitate to relieve himself on a rival lawyer in a courtroom urinal and nonchalantly says, "Innocent people cannot afford me" to the caring son who sensitively handles his father in the bathroom during a bout of incontinence without hurting his ego.

As a criminal defence lawyer defending his father in the court, Downey Jr. is razor-sharp in his legal jargon, as he is in portraying the myriad emotions that flit through his face.

His only competition is from Robert Duvall, as the disciplinarian, ethical, 72-year-old judge with an indefatigable spirit even when his health is failing. He has his weak moments when he admits that he pardoned convict Blackwell and let him off with only 30 days of imprisonment, because his "wilful disobedience and recklessness reminded him of his middle son, Hank."

There is Jeremy Strong as Dale, Hank's differently-abled, younger brother who is forever, filming and capturing life though his camera. He delivers a sensitive, but fairly predictable performance.

Cinematographer Janusz Kaminski captures rural Indiana perfectly. Whether it is Hank cycling furiously on lush green lawns and experiencing liberation or the father-son fishing scene -- these are pure visual delight. What adds to the aesthetics of the frames, is the lighting which is deliberate. It succeeds in creating the apt effect, although dramatic.

Overall, what keeps you riveted to this oft-heard story is without a doubt, the powerful performances.