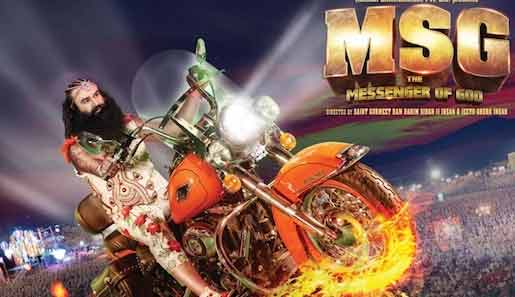 Among his many talents he sings, dances, preaches and pontificates -- but can he make a movie?

Going by the roar in the theatre, he surely can.

Audiences adore Gurmeet Singh Ram Rahim Singh. But more than those watching, it is the characters gawking on screen who seem to worship their hero in the same way that Chennai worships Rajinikanth or cricket fans worship Sachin Tendulkar.

In the film, we see men, women and children falling at his feet in Nirvanic ecstacy. In a crackling prologue, shot in the spirit of a Rajkumar Kohli thriller in the 1970s, Guruji's sprawling Ashram is attacked by masked marauders who have come to slay the spiritual leader. In less than 10 minutes the terrorists' guns are on the floor. And so are they. Cowering and whining for forgiveness.

"MSG" is not a film. It is a massive crash-course in self-promotion, a reflection of what its helmsman feels and why devotes fall by the millions at his milk-washed feet.

The narrative proceeds in the spirit of episodes of a long-running serial, each episode chronicling the exploits of a godman-superhero who can make things happen by simply making a wish.

He shuts his eye and the evil force evaporates. So we see episodes such as 'Guruji Takes On Terrorists', 'Guruji Blesses Community Marriages', 'Guruji Takes To The Broom For Swachch Bharat', 'Guruji Rocks The Stadium'.

My favourite episode in the two-and-half-hour-long film is the one where Guruji banters with paternal playfulness with a young unmarried devotee in his ashram who sulks because she'd have to get married and leave.

"You're a daughter. That's what daughters must do," Guruji explains playfully to the girl as she protests. A foreigner girl with a permanent smile on her face photographs the banter.

The above sequence is so Sooraj Barjatya, so Alok Nath and so Amrita Rao. Even Barjatya would blush at the gushy homage to his cinema.

The filmed crowds reminiscent of Prakash Jha's political dramas, apparently comprising Guruji's real devotees, are so large, it is hard to identify one fawning bhakt from another except when the bhakt sports a turban or a skull cap.

That apart, I can only vouch for the fact that Guruji's devotees in saris are women, and the ones in dhotis are men.

In the melee of devotees I could make out two women devotees. One was a rehabilitated sex worker, played by Flora Saini. More interesting was a foreign woman journalist named Alice played by Olexendra Semen.

There's a lot to be said about a spiritual leader who takes to filmy "hero-giri" with such sincere gusto. Even Rajinikanth can't equal this Guruji's reformist fervour. He acts, directs, composes the songs, writes the lyrics and, of course, performs the miracles.