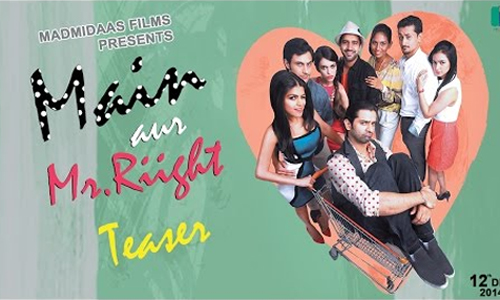 Finding one's Mr. Right can be an ordeal. Well Adeeb Rais's Main Aur Mr. Riight was one in itself. One begins to think, why would a talented actor like Barun Sobti, choose a film like this as his debut to Bollywood and sabotage his apparent film career. One thing for sure is that if anything has to happen good, it would be only for Barun as the others are pretty much clueless as what they are up to in the film.
The movie is about finding 'Mr. Right' but does one really exist? A slice of life, romantic comedy that talks about love, relationships and singlehood. Its a story of eight friends living their individual and successful lives. The story sails through each and every one's life of which the major plot being that of Aliya & Sukhi.
Barun Sobti essays the role of Sukhi in the movie, who is a struggling actor. He does his part quite well and his effort is noticeable and worth mentioning. He has essayed a character which has a comic element, which he does hilariously well and the only time one will laugh in the movie, because the other time you would laugh without a point.
Shenaz Treasurywala is annoyingly cute in the movie. She essays the role of Aliya who is a casting director for films. Well she is one who needs to learn to act. Wearing skimpy clothes can't do the trick always, can it?
The movie has a boring storyline and half baked plot and characters. The music doesn't do any magic to the film, in fact pulls it down even more.
This weekend, better look for your Mr. Right of Miss Right elsewhere, because they are definitely not at the movie, unless you are a die hard fan of Barun Sobti as he is the only 'Riight' in the film
Anita Menon