View Profile
Kaminey is a Hindi movie shot in a very Tarantino - Hollywood style. A story about twin brothers' Guddu and Charlie each portrayed flawlessly by Shahid Kapoor maintaining their individual characteristics, defects and traits.


The brothers are born with spe 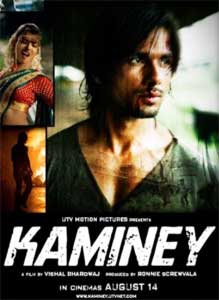 Featured Video
ech defects - Where the coy and law abiding Guddu stutters and stammers and the dare devil out of the two - Charlie carries a mild lisp and at times strangely is also shown 'thinking' with a lisp. (A director's call or maybe a flaw in ignorance)


An early tragedy with their father leads them to stray away, and soon leave each other in hate. But their uniquely different lives and motives doesn't cease in placing the two brothers, on the same threshold in the climax!


While Guddu works for an NGO aiming to spread Aids awareness among the working class society, Charlie gets involved in smuggling 100 packets of cocaine, which he plans to sell for an alarming sum of 10crores of rupees to the mafia chief Tashi with the help of a corrupt police official Lobo.


Guddu believes that the only mistake he has committed in his life is probably getting his girlfriend Sweety pregnant, (character portrayed by Priyanka Chopra) until of course she reveals to him, that she happens to also be the younger sister of the notorious gangster of Mumbai Sunil Shekhar Bhope!


Bhope is a Maharashtrian fanatic who is of the belief that Maharashtra is being encroached upon by outsiders, depriving the Maharashtrians of their own space and necessities. - A direct finger point to the present day Maharashtra chief Thackeray. But Bhope's own sister enrages him by marrying Guddu who belongs to the bhaiya community!


The story takes a turn when Guddu lands himself in a situation where in order to appease Sweety's brother he makes a farfetched commitment of 10crores to Bhope in marriage. Now Charlie happens to be Guddu's only resort for the money! But the brother's hate each other to be of any mutual help!


Climax places both the brothers caught in-between 'the devil and the deep sea' like situation, flawlessly shot by cinematographer Tassaduq Hussain. Kaminey is totally a director's film, where dir Vishal Bharadwaj has made a bold attempt in showcasing the harsh realities of Mumbai city while adding a dash of mad - humor to its characters.


Dark cinema unfolds at rapid pace touching upon topics like aids awareness through the song Bhawra Aaya Re, pre-marital pregnancy, drug trafficking, and communal issues such as the one between Thackeray and the Bhayia community in Mumbai.


Shahid Kapoor breaks the mould of a chocolate romantic hero and proves he is as good in portraying hardcore unconventional character roles as well.


Priyanka Chopra plays her part - of a strong minded Maharashtrian mulgi (girl) with unconditional love for Guddu quite convincingly, except for a mild pronunciation flaw in one scene where she almost pronounces " baste" (to sit) as "bashte" Wonder what the sound recordist was doing at the dub!


The performances of two actors - Amol Gupte (the writer and screen-play director of Tare Zameen Par) and actor Chandan Roy Sanyal make them the real surprise package of the film!


Amol Gupte's excellent performance as the Maharashtrian fanatic gangster makes his character of Sunil Bhope some what immortal amongst the portrayals of 'gangsters' in Hindi cinema. And Chandan Roy Sanyal gives a back seat to many character heroes with a kinky shade like Manoj Bajpai. Both actors leave behind a lasting impact on your mind and as you leave the cinema hall you wonder what took so long for these actors to make their debut in Bollywood?


On the whole! Vishal Bharadwaj has taken clichs like 'twins' and 'stammer' and woven his magic wand to create a master piece.


Cinematographer Tassaduq Hussain's dark and moody frames and unconventional compositions are a visual delight, especially the climax scene which is shot like never before in Hindi cinema.


The foot-tapping racy tracks (music by Bharadwaj himself) Dhan Tadan and Pehli Baar Mohobat are perfectly tugged into the plot and do not fall out of place. The Baground score also mark's a change to the usual clich Hindi film Baground scores - like the scene in which Shahid is beating up the goons we hear an old Hindi movie retro track being played in the baground, in asha bhosle's voice instead of the regular dishum dishum! But for sure portraying the dark side of the society certainly leaves this movie limited to a selective section of the audience!


Bollycurry Rating: 3 and a half chillies. (Very Good)