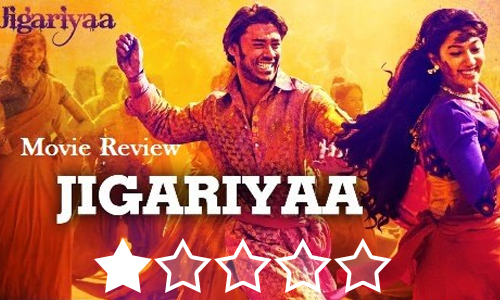 Here is another love story with a common sad ending. Every next scene is so predictive that you will not miss anything even if you take a small nap in between.

Just like 'Ishaqzaade', 'Jigariyaa' is also inspired by true love story. It's a tale of Shyaam Lal Gupta (Shyamu) and Radhika Sharma (Radha). Shyamu is a happy go lucky guy who has already failed thrice in same class and loves to write shyaaris. Radha, the only daughter of rich and reputed pandit family of Mathura, is a well educated and a caring girl. They meet and fall in love with each other ignoring all the differences between them and their family. But destiny had other plans for them and they break apart.

Being debutants, Harshvardhan and Cherry were good but there is a lot of scope for improvement. The other cast of the film were great but just because of common story line and dialogues will make you ignore everything else.

The romantic numbers of the film are fresh, sufi-inspired and Indian classical overtones. Rang Rang De and Phurr Phurr are retro catchy numbers. Over all songs are easy on ears.

All in all, makers of Jigariyaa tried to make another Ishaqzaade and Aashiqui 2, but failed badly. The lack of focus on Shyamu and Radha's love story will make it difficult for audience to accept the drastic step taken by them.

The biggest problem is the message conveyed by the film. In a country where youth already lack patience and thinks killing themselves is the best solution for every problem in life, the film is like adding oil to fire.