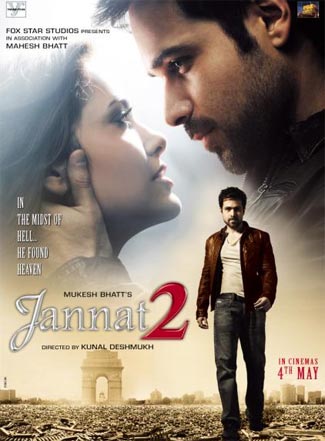 There is a memorable moment of flushed pain at the end of this textured film on arms and the mangled, when Randeep Hooda symbolically throws out his wife's memories from the car window.

Life's life that. Sometimes you need to just roll down the window and throw away the extra baggage that you carry around in the name of love and commitment.

Shorn of artificial affectations 'Jannat 2' is easily the best film from the Bhatt camp since 'Gangster' years ago. Neither as gruesome as 'Murder 2' nor as bland as 'Blood Money', 'Jannat 2' brings forward some inspired writing and two watchable performances that lend a blend of the bitter and the biting to the proceedings.

Let's get one thing straight. 'Jannat 2' leaves behind the world created in 'Jannat 4' years. This is hell, for sure. Shot in the dark ember hues of a scorching humid sweltering May evening when all things bright and beautiful shrivel up in the heat, 'Jannat 2' is not for the squeamish. Once you stop wincing at the volley of MCs and BCs(some of them quite unnecessary, I thought) 'Jannat 2' (ironical title, if ever there was one) sucks you into its murky world of illegal arms and other soul-bartering deals with the devil.

Don't believe the silly promotional trailers of 'Jannat 2'. There is nothing funny, flippant, flighty or farcical about this film. It's a brooding intense study of the troubled relationship - or a bro-mance, if you will - between a burnt-out alcoholic cop(Randeep Hooda, spectacular in his devastated avatar) and a gun dealer who turns police informer when love hits him where it hurts the most.

Emraan Hashmi as Sonu Dilli (whatever!) kind of takes over the film from the first frame. He loves his character and embraces it unconditionally. He gets to play all the roles that his fans like to see him in-including the incorrigible kisser's part - and he does them all effectively.

But Hashmi is best at expressing the wonderment and self-abnegation of love.

The courtship scenes with the self-important doctor (debutante Esha Gupta) find Hashmi expressing a kind of bewildered intensity that makes you believe this guy can give up a life of crime for the girl. 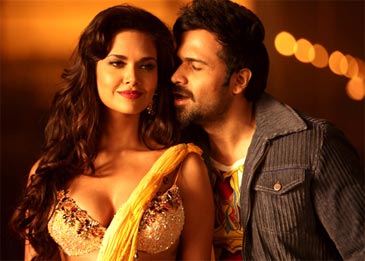 But the film belongs to Randeep Hooda, make no mistake about that. Every word he speaks is delivered with a sledgehammer's impact. Playing a cop grieving for his murdered wife Hooda's angst spills out of every shot. You can't take your eyes off the screen when he is around.

The resonant writing (Shagufta Rafique) restricts the dramatic tension to the two principal male actors. These two guys love to hate each other. All the energy that the narration so effectively exudes emanates from the two main actors and then spills out into various directions. Somewhere in the mid-section the plot begins to get somewhat predictable and baggy, what with arms dealer Manish Choudhary snarling his threats so loud, you wonder if villainy in our films got stranded in the 1970s.

But then comes the end-game. The climax chase shot in a mosque's courtyard is absolutely heart-in-the-mouth. And then comes the end-game where Mahesh Bhatt's masterly touch comes into play with such luminous alacrity that that you are left finally with a film that tells us it is easier to live with hatred then pain.

Director Kunal Deshmukh demonstrates a far firmer grip over his characters and plot this time than he did in politically correct 'Jannat' and the soggy 'Tum Miley'.

Besides Hooda and Hashmi who bring to the narrative a rugged immediacy, the film pitches forward some brilliant supporting performances by little-known actors like Zeeshan Mohammed Ayub (playing Hashmi's sidekick) and Brijendra Kala (Hooda's right-hand man).

Delhi, the city that houses many Bollywood tales of late, is shot by cinematographer Bobby Singh in shades of grey and dusty brown.