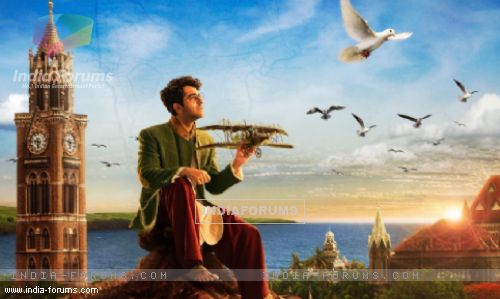 Have you ever wondered what it would be like to fly? Shivkar Bapuji Talpade, a scientist with presumptuous ambition to fly, managed to construct and fly India's first unmanned airplane in 1895. Debutant director Vibhu Puri's Hawaizaada is a tribute to the scientist who apparently manned the first aircraft that civilization has ever flown.
Hawaizaada is a story of a boy, Shivkar Bapuji Talpade or Shivi (Ayushman Khurana), who has failed 8 times in 4th standard and studies with his genius nephew in the same class. Pandit Subbaraya Shastry, considered to be mad, is a scientist who is trying to make an "Udankhatola (air plane)", meets Shivi and recognises his hidden talents. With this Shivi's life takes a U-turn.
The characters, be it the aimless Shivkar Talpade or his kooky mentor Shastry, or the British officers who scowl at any attempt by Shastry and Talpade to create history, these are people who don't believe in holding back emotions. Mithun Chakraborty as Talpade's mentor is goofy eccentric and endearing. Ayushman Khurana as Shivi, a trippy dreamer, is flawless. As for Pallavi Sharda, she looked gorgeous and played her part well.
Going back in time is never an easy task in cinema but Hawaizaada has beautifully recreated 1890s era. The director has constructed a world as unthinkable on paper as the theory of flying a plane must have seemed to Talpade's contemporaries. The writers used Talpade's dream of flying as a metaphor for anyone from any era who has dreamt of breaking free.
The script is great, actors are superb, cinematography is amazing but what lacked behind is pace. So, the movie good but only go for it if you are okay watching slow movies.
Varsha B.