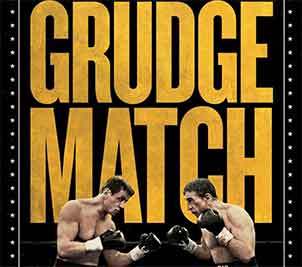 Peter Segal's, "Grudge Match" is a volatile, tongue-in-cheek comedy about two retired boxers from Pittsburg. They had fought each other twice earlier with each winning a single bout, but now they can't see eye-to-eye.

This "Grudge Match" is the resultant best of three matches between Henry Sharp aka Razor (Sylvester Stallone) and his ace opponent Billy McDonnen aka Kid (Robert De Niro) that takes place 30 years after their last bout.

Kid won the first bout in 1982. The next in 1984 was won by Razor, who baffles his fans by announcing his retirement soon after winning the light heavyweight championship.

Post retirement, both lead sedentary lives away from the boxing ring with Razor as a factory worker and Kid as a stand-up comedian in a night club.

Now, they are far past their prime, and a fast-talking promoter named Dante Slate, Jr. (Kevin Hart) convinces them to step into the ring to promote a video game version of their famous fight.

But unfortunately, an accidental confrontation between the two during the marketing promotion of the video game ends up going viral.

This sets off a media frenzy, which ignites the public interest in the two ageing foes.

Both boxers agree to face each other in the ring to settle scores. The match is inevitable. Though the focus of the film is the final "grudge match", the crux of the plot meanders capturing the lost years and personal moments in each boxer's life.

Jam-packed with dialogues that are absolutely funny, exuberant with extempore loud and crass adult humour, the film keeps you in stitches.

It is really funny to see, De Niro mouthing, "I was arrogant and inadequately trained except if you consider, sex 16 times a week."

While explaining why he lost the second match. Or the hard of hearing Alan say, ace Knock him out, hurry up. I need to pee," in the middle of the climax scene.

The duel in the boxing ring reminds the audience of the iconic boxers the two ageing stars played during their hey days.

Today, De Niro is 70 and Stallone 67 - both fit and agile. They seem to be banking on their past laurels and hence have not put in much effort to emote. Considering their pervious performance as boxers, this one does not even qualify for Oscar nominations, but nevertheless they are persuasive and convincing.

They live up to the script's demands, making it difficult as to whom you should root for.

They are brilliantly supported by Alan Arkin as Louis 'Lighting' Conlon, the grumpy old man who is training Sharp, Kim Basinger as Sally - the love interest of both boxers, Jon Bernthal as BJ - the estranged son of Billy McDonnen who later connects with his father to become his trainer.

And a special mention should be given to the charming Camden Gray, who as Trey, Billy's grandson enchants the audience with his innocence.

Kevin Hart as the boxing promoter is his usual self, loud and boisterous like a stand-up comedian.

The script though formulaic, has a predictable, yet interesting graph. The background score by Trevor Rabin's is good. The vocals "For, you, for you, give me reasons to believe" and "Bang, Bangaa are well used to elevate the viewing experience.

Overall, visually, the film captures a feel of a reality film that is far from the glamour quotient. It may not be a great film, but is a good and amusing one that will not disappoint you.

Rhea Sharma to be seen in Ekta Kapoor's next?
42 minutes ago