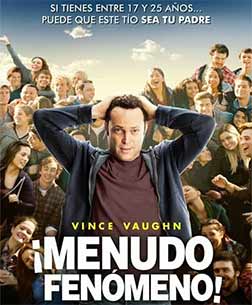 While the Indian audience has seen "Vicky Donor", which was inspired by Ken Scott's French-Canadian production called "Starbuck", "Delivery Man" is a blatantly brazen Hollywood version of the same film by the same director.

The premise of all the three films maybe alike. The film's story explores the life of David Wozniak (Vince Vaughn), over 20 years after he made his donations.

They say the past catches up with you. So, after losing over a hundred thousand dollars in a pyramid scheme business, David is now a harried and hassled truck driver working in his father's establishment, delivering meat. While the creditors are chasing him, he learns that his girlfriend Emma (Cobie Smulders) is pregnant. At the same time, he learns that he is the center of a confidential lawsuit.

Apparently, 20 years ago in order to make some extra money, David made 693 donations at a local fertility clinic under the pseudonym 'Starbuck' which in turn resulted in 533 children, of whom 142 were now seeking legal help to reveal Starbuck's true identity.

Now caught between this legal hassle and Emma's pregnancy, David decides to make a clean break. So, against the advice of his best friend Brett (Chris Pratt), a struggling lawyer, David surreptitiously meets his biological children and forms a bond with them.

During this phase, the lawsuit becomes a hot debatable trending topic in the media and the crux of the story is whether David will reveal himself and take an active role in the lives of the 'Starbuck Kids' - or focus entirely on his "real" family.

Vince Vaughn plays the naive yet irresponsible black sheep of the family. He aimlessly meanders into the scheme but despite his best efforts, there is no emotional connect between him and his character. Consequently, his entire effort looks superfluous. There are a few moments when he shines as an actor, but they are few and far between.

Similarly, Cobie Smulders gives her best, yet the chemistry between her and Vaughn refuses to surface. The only meaningful laughs come when Chris Pratt is on screen. His poker-face dialogues have a comic timing of their own.

The others have their glorious moments too. Particularly, Andrzej Blumenfeld as David's father, Britt Robertson as David's recovering addict daughter, Adam Chanler-Berat as the well-read and philosophical lost boy Viggo and Jack Reynor as aspiring actor Josh.

With a premise so interesting, "Delivery Man" is branded as a comedy but strangely it balances between a family comedy and bawdy drama so inconsequential, that it is hard to take a stand.

The script, written and directed by Ken Scott, is so formulaic and with several plot threads, it gets difficult to get emotionally hooked to the characters as they are not developed beyond the basic. The story never revisits the conflicts that brought them together with David.

After a stage, the narrative gets predictable. This is very evident when David plays guardian angel to his grown up children. Also, there are no major dramatic moments in the plot. Hence, the inciting moments just slip by as ordinary and ineffective.

So, without comparing to the original or the inspired versions, overall, Ken Scott's "Delivery Man" runs short of delivering a perfect entertainer.