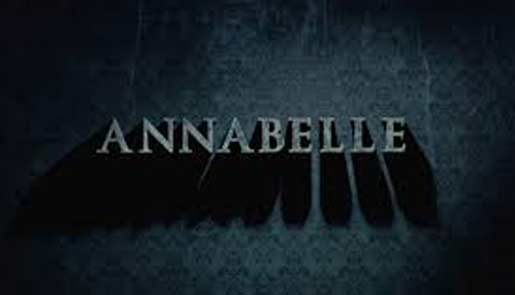 Director John R. Leonetti's "Annabelle" comes with the baggage of its predecessor "The Conjuring". It is the back-story of "that doll" which haunted its audiences.

Here we learn how the doll was christened "Annabelle" and initiated into the horror series.

At the very onset of the film, a static plate states, "Since the beginning of civilization dolls were used as conduit for occult, good and bad" and the film rolls on with a scene from "The Conjuring" where two nurses give an insight to how terrified they were when they came in contact with the doll and then abruptly flashes back to begin its tale.

Set in Santa Monica in California, the narration takes us straight into the lives of a young couple -- Jon and Mia Form (Ward Horton and Annabelle Wallis). They are expecting a baby. The doll is Jon's gift for his wife.

What follows is a series of untoward events beginning with the murder of their neighbours, the Haggens, by their wayward daughter Annabelle. The incident spooks them out of their house and they shift residence to Pasadena in California. The doll follows them and so do their miseries, which include paranormal activities and hallucinations.

The script by Gary Dauberman, who had earlier penned "Swamp Devil", begins on a promising note with effective scare thrills that consists of actions accompanied by eerie sound effects of the sewing machine automatically switching on in the middle of the night, the creaky rocking chair, and the static buzz on television. But gradually the plot laced with disjointed and episodic scare sequences packed with clichs has a forced graph that makes the film dense and ludicrous.

Owing to the ridiculous plot, the dialogues seem absurd and unreasonable.

On the performance front, the film belongs to Annabelle Wallis. She, as the charming and graceful Mia Form driven to paranoia, is effective. Ward Horton as her caring husband Jon ably supports her.

But since most of the dramatics involve only Mia, Jon's absence is conspicuous during these crucial moments.

Alfre Woodard as the bookstore owner and a sacrificing neighbour along with Tony Amendola as the parish priest are wasted in their flat supporting roles.

Overall, due to the generic and formulaic turn of events, their performances do not manage to elicit any emotional support from the audience.

Made on a moderate budget, the production quality of the film is above average. Production designer, Bob Ziembicki has managed to recreate the early 1970 era, which is captured by James Kniest's lenses to perfection.

Overall, with a few effective scares "Annabelle" is a recycled jamboree of scare flicks that feels like wasted resources.