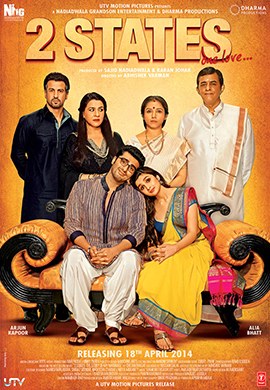 Well it is always said that it is not easy to fall in love, but little do we know that is actually the easiest part. The most difficult part comes when you have to confess to your parents that you are in love, or more so you are in love with the right person. But what if you both are from two different backgrounds, ideologies, and even worse when you belong to 2 States. This film tells the tale about the turbulence and triumph of two people in love. Based on the Chetan Bhagat's bestseller 2 States the movie is more or less a motion book in itself.

2 States is the story about Krish and Ananya, who meet in IIM Ahmedabad and fall in love, their love and patience is put to test when they have to convince their respective parents about the whole thing. As Krish (Arjun Kapoor) is Punjabi and Ananya(Alia Bhatt) is a Tamillian, convincing their parents is an uphill task. Eventually Krish realizes that the most important thing in a marriage is love, that is the guy's family should love the girl, the girl's family should love the guy, the guy's family should love the girl's family and vice versa; and after all this in case the guy and the girl are still in love with each other they then, finally get married. How do Krish and Ananya go about this challenging task is what the movie revolves around. 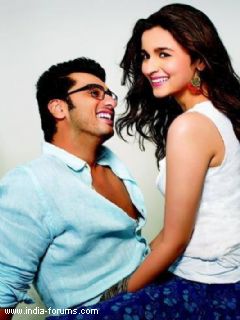 Well to be honest the movie is almost a word by word description of the book. It even has the same dialogue, that's probably because the writer of the book and the film is Chetan Bhagat. Well the movie is entertaining, no doubt, but if you have read the book, you would be a little disappointed as most of the scenes that you would look forward to in the film, are not there at all, but they were the main highlight of the book. If you have not read the book, still you would find some glitch in the flow of the story.

Nonetheless some great performances to see in the film, for sure.  To start with Arjun Kapoor, who plays Krish Malhotra, look fabulous in the film, seems completely in the skin of the character and convinces the viewer of his agony and eventually you want him to be with the love of his life. Arjun Kapoor has improved leaps and bounds in his acting skills and conveniently carries the entire film on his shoulders. Alia Bhatt, who plays the role of Annanya looks pretty on screen, but somehow doesn't fit convincingly in the role of a Tam Brahmin. As compared to the last film Highway, this one seems less rehearsed and seems to be a very casual performance. 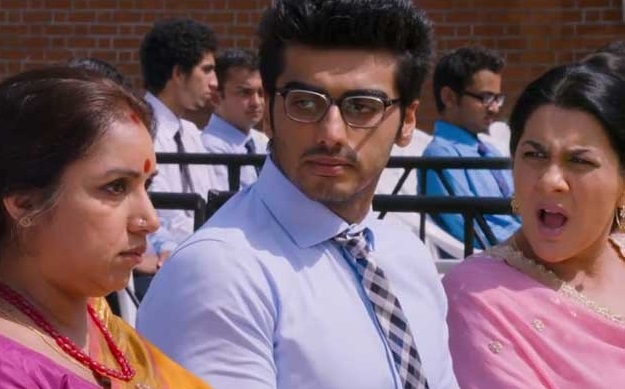 Amrita Singh who plays Krish's mother fits perfectly in the role of a possessive Punjabi mother. She is a surprise package with her performance. As she expresses her love for her son, agony of a broken marriage, fear of losing her son to a girl of his choice, all explicitly well. Though she has not been seen around off lately, but proves that she was and still is a terrific performer. Next to mention, Ronit Roy who plays Krish's father, as always does a fantastic job, in the role of a retiered Army officer, who is forever angry with his wife and son. Ronit Roy portrays the shrewd character very well, yet again after portraying a similar character in critically acclaimed Udaan. Revathy, who plays Ananya's mother, is wasted in the film. For such a talented actor, has been underplayed and her potential hasn't been exploited at all. Even though she does a great job in however little role she has. 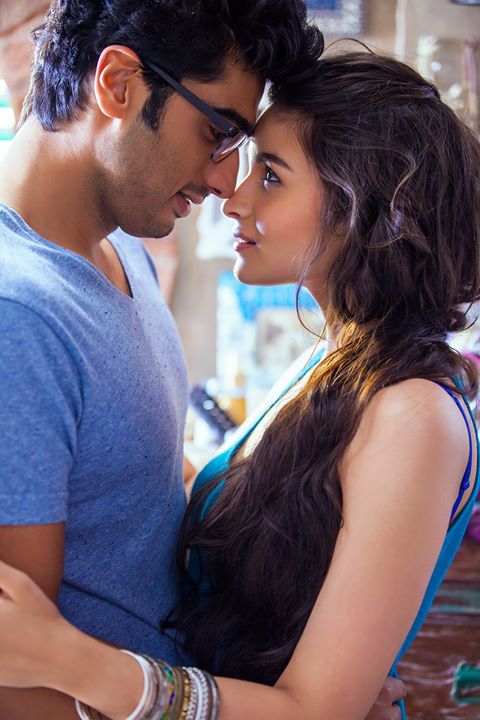 Songs of the film, 'Offo', 'Locha-e-ulfat', 'Mast Magan'; have already topped all the chartbusters and is very well weaved in the story of the film. Shankar-Ehsaan-Loy has composed some awesome tracks, which are hummable as well as foot tapping. The entire film has some very bright and lively use of colors, and thus doesn't go dull in any frame.

The only place the movie lags behind is that, some of the most important scenes in the book haven't been used in the film, which is why the movie seems incomplete, but only for those of you who have read the book. Otherwise the film is decent love story, and motivates you to give your love story at least one chance. For all those who are in love and have to do some convincing bits, you have lots of cues to take from here, and for those of you who didn't even try once to complete their love story, better luck next time.