View Profile
Item numbers have become an important aspect of any movie. With Karzzy 4 having three item numbers , this trend is just picking up rapidly .The new comer Megha Chatterjee, daughter of Mousumi Chatterjee 'Balika Badhu' fame will be soon joining the league 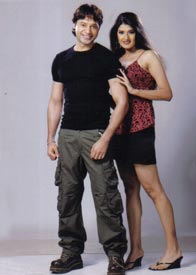 Featured Video
. It will the first time that Megha will be performing an item number in Sanjay Sharma's "Jaane Bhi Do Yaaro". Megha is paying a tribute to the yesteryear actor Parveen Babi. This is also said that it is the most expensive item number and for this song the producer and the director has spent 80 lakhs and a huge palace set with 2000 crowd and 500 dancers.

On this the main lead Kapil Sharma says, ï¿½Coincidently Megha and I are friends from long time, she came to my birthday party and my brother director Sanjay Sharma spotted her. He offered her the heroines role but due to her prior commitments, she couldn't give us dates. But later we have thought of putting an item number in this movie and immediately we thought of Megha as we were looking for a fresh faceï¿½

This item number is not the typical item number but it is a remix version of Bappi Lahiri's famous classic number "Raat baki, baat baki" from Namak Halal. Bappi Lahiri himself remixed his own song for the first time and we wanted a really glamourous girl to do the number and Megha was the perfect choice. Initially Megha was little bit apprehensive about performing an item number and she was getting offers for the main role in other movies.

But her mom Mausumi insisted her to do the number not because she shared a close relation with Parveen Babi ,but also because it is the right time and opportunity. It seems that she grabbed the whole songs in three months.

Letï¿½s see if Megha sizzles the silver screen with her item number!