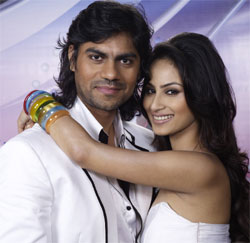 TellyBuzz had reported a day back that Deepti Bhatnagar Productions will be coming up with a travel based show on Star One titled Hamsafar. We had also reported that various popular celebrity couples will be asked to host an episode of the show.

According to our source, "Mouni Roy and Gaurav Chopra will be seen hosting one particular episode of Hamsafar. They will most probably be in the segment of Italy and France".

We had reported earlier that Mouni Roy who is presently seen in Star One's Ssshhh Phir Koi Hai will be replaced because she plans a trip abroad. And we get to hear now that she has quit the thriller show because she intends to host the travel show with Gaurav.

When contacted, Mouni Roy confirmed the news and said, "Yes, I quit Ssshhh Phir Koi Hai for the travel based show. Gaurav and I will be hosting one episode. We have been asked to cover Italy and France".

We tried calling Deepti Bhatnagar, but she remained unavailable.

As reported earlier, Karnvir Bohra and Teejay Sidhu is another couple who have been finalized to host an episode of the show.

No they weren dating until Mouni came into the picture!!!!

burgerchaap 10 years ago I never understood a thing about this couple...wasn't Gaurav Chopra the husband of the girl who played Rimjhim in PKG?

zara_11 10 years ago nice couple. Good to see them still together.