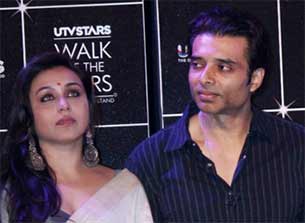 Actor-producer Uday Chopra is glad that his "Mujhse Dosti Karoge!" co-star Rani Mukherjee is now his "bhabhi" (sister-in-law), and says she's always been a well-wisher for him.

"They have got married and she's part of our family. We have welcomed her and her family. She is certainly a homemaker," Uday told IANS.

"Our bonding has been great ever since we worked together in 'Mujhse Dosti Karoge' and she is somebody whom I can always talk to. Today she is my bhabhi, and she always hopes that I really succeed in whatever I do. And of course she is my bhabhi now, but more than that she is my well-wisher," he added.

Uday, who has been seen in the "Dhoom" franchise of his home banner Yash Raj Films, is currently looking after the Hollywood wing of the production house, YRF Entertainment.